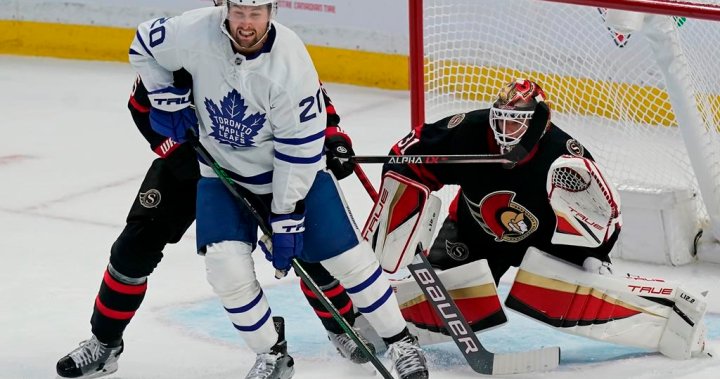 OTTAWA – Everyone was talking about Brady Tkachuk in Ottawa on Thursday night, but Anton Forsberg was the man of the hour.

Forsberg made 46 saves as the Ottawa Senators beat the Toronto Maple Leafs 3-2 in their season opener.

It was a perfect way to cap the day for the Senators, who had signed Tkachuk to a seven-year extension hours earlier.

“It’s like you welcomed your big brother home,” said Senators coach D. J. Smith. “He takes care of the boys in there and, you know, it doesn’t matter who you’re playing, if you’re playing for the other team you know he’s out there. He continues to get bigger, stronger. He never takes a night off.”

Tyler Ennis led the way with a goal and an assist, while Chris Tierney and Alex Formenton also scored.

The 28-year-old Forsberg was superb as he made his first ever season-opening start. Forsberg wasn’t tested early as the Leafs had just two shots in the first ten minutes of the game, but from that point on was busy.

“I was standing there for a bit and then they kind of put a lot of shots there after the ten-minute mark,” Forsberg said. “I mean I tried to not think about it and just stay within my structure and then go from there.”

Smith couldn’t have asked for much more from his goalie.

“Both goalies were unbelievable, ultimately (Forsberg) is the difference (Thursday),” said Smith. “He just looked confident. The goals they got are grade A. We give one up through the seam to a guy that shoots as good as anyone in the league. So, certainly our discipline has to be significantly better playing against them.”

Toronto trailed 3-0 heading into the third and it was the 38-year-old veteran Jason Spezza, a former Senators captain, who led the charge and finished with a power-play goal and an assist, as did William Nylander.

“We knew if we got one, we would probably get two and make it interesting,” Spezza said. “Teams generally sit back once you get a couple and tighten up a little bit, so we just wanted to get a goal on the power play.”

The Senators and its 15,159 fans caught a break when John Tavares was called for hooking Connor Brown in the final minute of play as he looked for the empty net.

Keefe was less than impressed with the call.

“We’ve seen the memos on the crosschecks and the guys are well aware of that and they’re adjusting to that, but I haven’t seen the memos on not being able to lift guys’ sticks, that’s new,” said Leafs coach Sheldon Keefe. “I don’t think that’s going to be the standard moving forward, but that’s early in the season for everybody.”

If not for the slow start things could have turned out differently for Toronto, who had opened the season Wednesday night with a 2-1 win over Montreal.

“I thought we had a lot of guys (Thursday) that didn’t have as much gas in the tank here as they did (Wednesday),” said Keefe.

Peter Mrazek got the start for the Leafs (1-1-0), but was replaced by Jack Campbell to start the third as he sustained a groin injury on the final play of the second period.

Keefe had no update on Mrazek following the game.

Both teams had a number of chances through the second period, but neither were able to capitalize.

The Senators got off to a great start taking a 3-0 lead after the opening period.

Nick Holden fired a puck at the net and it bounced in off Tierney all alone in front. Ennis made it 2-0 with a power-play goal as he tipped a Thomas Chabot point shot and Formenton wrapped things up with 0.6 seconds remaining as he fired a shot past Mrazek.

Notes: Scott Sabourin and Michael Del Zotto were a healthy scratch for the Senators…GM Pierre Dorion said Colin White underwent surgery Thursday and updated that Austin Watson is expected to miss the next four weeks (ankle), while Clark Bishop will likely be out seven to nine weeks (lower body). Toronto’s Timothy Liljegren was a healthy scratch.

This report by The Canadian Press was first published Oct. 14, 2021.