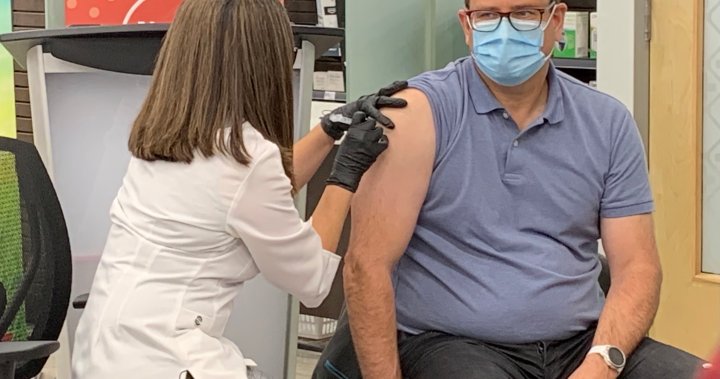 As the province continues to battle the latest wave of COVID-19, Saskatchewan Health Minister Paul Merriman was at a pharmacy in Regina on Thursday, urging people to get their flu shot this year.

It was all part of the province’s push to get people to book their free flu shot online, or find information about walk-in clinics at their new website: 4flu.ca

The flu was what the health minister wanted to talk about, but it didn’t quite work out that way for him.

During Thursday’s media scrum, most of the questions for Merriman focused on the current COVID-19 situation across the province.

On Tuesday, the province hit a record number of people in the ICU, and that’s left many calling on the province to ask for help during the fourth wave.

Merriman has been in contact with the federal health minister roughly every two weeks to discuss what the federal government can offer, but right now, he reports, “the SHA say they have the resources in place to meet our needs.  If we get to a point of where we can’t provide the quality of care, then they’re going to look to other provinces to be able to assist us.”

With hospitals at capacity, Saskatchewan is planning on sending some of its critically ill COVID-19 patients to Ontario to help relieve some pressure in ICUs, Merriman has spoken with Ontario health minster Christine Elliott and says they would welcome any patients, but didn’t discuss any “specifics”, like the number of patents that might be transferred, or when this might happen.

Merriman adds, “If things do not improve, which we’re very hopeful that they will improve, if we have to, we will reach out to the federal government, but right now we’re working with the other provinces to see if we can move any of our capacity out there if we get to that point”.

Medical experts believe the province also needs stronger public health measures.  Dr Katharine Smart of the Canadian Medical Association says, “I think gathering limits are really critical at this point. I think they also really do need to give strong consideration to a circuit breaker. They have pushed their health-care system to the edge of collapse, and the only way to really bring numbers down quickly is to limit close contacts.”

When asked if the provincial government had any plans to increase restrictions, he says, “The restrictions are only one tool that we have, we’ve implemented some very strict restrictions right now and we’re hoping that it’ll flatten out and the numbers will be on the decline.”

Saskatchewan waited until mid-September to implement an indoor mask mandate while its proof of vaccination system only began on Oct. 1.  Dr. Cory Neudorf of the Saskatchewan Health Authority says, “That has been good enough for us to get a plateauing, but not sufficient to see us get that rapid decline that we’d like to see in order to take pressure off our system.

Merriman went on to say the Provincial Emergency Operations Centre is looking at ways to free up resources to help front line workers, but denies the immediate need for out-of-province assistance.

“If we hit a certain threshold of that number of where we were close to last weekend of ICU capacity, then we’ll start looking out of province.  We have all of the pieces in place to move patients out of the province if need be, but we’re not there right now,” Merriman said.

He also disputed that Saskatchewan had the lowest vaccination rate across Canada, saying, “It is underestimated because we do have a bunch of people who have moved out of province that still have a health card that aren’t getting vaccinated here.

He added, “the Provincial Emergency Operations Centre is going to looking into this with the SHA and e-Health Saskatchewan to clear all of that up to reflect what’s really going on in Saskatchewan.

What could complicate hospital capacity issues even further over the next few months is the seasonal flu.

Dr. Tania Diener, Saskatchewan Health Authority Medical Director for Immunization, says, “You only need one appointment, and staff are trained to provide the COVID vaccine and the flu vaccine at the same time. Just pick two different arms and you’re good to go.”

With so many public health restrictions in place last year the province didn’t see many cases, but health experts are saying this year will be different, and it’s important to get that flu vaccine as well.

2:05
Doctors warn flu season could return with a vengeance

Doctors warn flu season could return with a vengeance