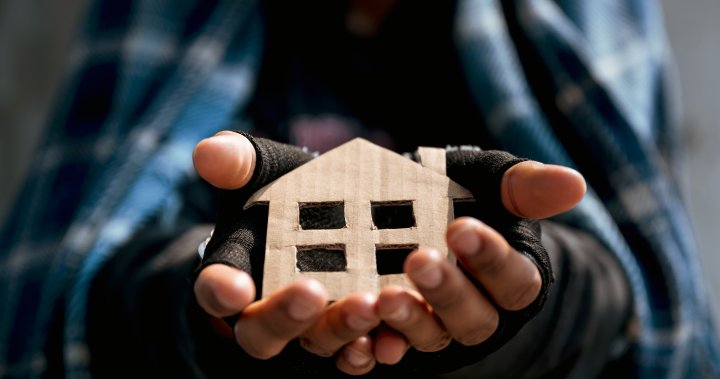 When a central Alberta city renewed its state of local emergency in response to rising COVID-19 cases, workers at an emergency shelter were overcome with relief.

It meant they wouldn’t be evicted from their temporary shelter in Red Deer at the end of September, forcing dozens of people experiencing homelessness back on the streets.

But with a 60-day extension, there are still fears clients will be thrown out next month when there is likely to be snow on the ground.

“We were in dire straits, but right now we have a partial exhale,” said Kath Hoffman, captain of Safe Harbour Society. The group operates the temporary shelter and accepts clients who use substances. Another Red Deer shelter is only open to those who are sober.

“Our extension for shelter will follow whatever that state of emergency is. When it gets lifted, we’ll be out. If it gets extended, we’ll stay.”

The expected closure propelled a staffing shortage for the agency, made even more difficult as clients face threats of COVID-19 and drug overdoses with an increasingly toxic street supply saturating Alberta.

Hoffman said the society has been navigating rocky waters for months. It’s a “nightmare” situation where hope hinges on a state of emergency.

The temporary shelter opened last March due to the pandemic. Provincial funding allowed Safe Harbour to open the additional shelter kitty-corner to its main building, which is not at risk of closing but doesn’t have much overnight capacity.

What used to be a bingo hall was transformed into a multi-purpose space. During the day, physically distanced tables and chairs fill a large concrete room. They’re replaced with sleeping mats at night.

There’s also a COVID-19 isolation space and a nursing station. Across the street, there is access to an overdose prevention site and detox services. Staff monitor bathrooms for drug overdoses and store people’s belongings in a sectioned-off room called “the airport.”

On a brisk day in October, the shelter sees less people than usual because of an outbreak of COVID-19. There are two people covered in blankets in the isolation zone.

2:19
Alberta’s other health concern: navigating the opioid crisis has become harder during the pandemic

Alberta’s other health concern: navigating the opioid crisis has become harder during the pandemic – Oct 2, 2021

About 120 people are in and out daily, with 60 people typically sleeping there overnight.

Red Deer city council voted earlier in the year to shutter the temporary site, after businesses and residents complained of crime and loitering.

The concerns are fair, Hoffman said, but no one else is taking care of this population or willing to house them.

During a city council debate on the future of the shelter in May, Coun. Vesna Higham described downtown Red Deer as a “war zone,” where residents were being “terrorized and victimized” by shelter clients.

Higham said if Red Deer doesn’t have an appropriate shelter model to deter harm to the community, then she would consider buying bus tickets to ship rule breakers to Calgary or Edmonton where more resources might be available.

Hoffman said it’s that type of fearmongering and ineffective leadership — not just from Higham, but other city leaders — that has landed Safe Harbour in a grim situation where no one is willing to lease it space.

“Shelters should never be political,” she said. “It’s non-profits taking the heat when things get hot … what’s really lacking is to separate those issues from the non-profit organizations that are trying to help.”

With a new slate of municipal leaders to be elected across the province Monday, Hoffman said she hopes to see “fresh blood with open minds and some cajones” properly address homelessness in the city, in partnership with community agencies, law enforcement and multiple levels of government.

Kristin Walsh, a spokeswoman with the city, said the topic of homelessness and shelter is a “highly complex issue” that the city can’t solve alone.

“However, we are working with many dedicated community organizations, social agencies, the province and innumerable stakeholders to find a permanent solution that is right for Red Deer,” said Walsh.

Prior to the renewed state of emergency, a September meeting with stakeholders determined a range of issues that could arise should Safe Harbour’s doors be closed on Cannery Row.

They include increased pressure on other agencies serving homeless individuals, a sharp decrease in city shelter capacity and daytime supports and increased health risks. It could also lead to an increase in loitering, encampments, litter and debris, said the city.

No feasible solution was determined to address the anticipated closure of the shelter, whenever that may be.

“If Nov. 15 comes and we’re supposed to go, maybe we’ll have a revolution or something,” said Hoffman.

“We have to make sure everybody’s warm.”