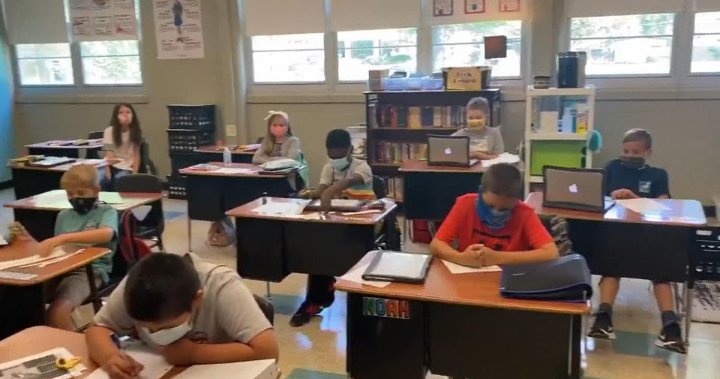 A Warman mother said she worries schools are taking too long to tell parents about possible outbreaks.

“I just got a text from one of the other parents there’s an outbreak in another classroom,” said Jennifer Nystrom as she spoke with Global News Tuesday afternoon.

It’s the second outbreak declared at a class at École Warman Elementary school within a week, according to Nystrom.

But she said knew about at least three cases in her son’s third grade class a week ago.

A letter sent to parents from the school division on Oct. 5 said they were waiting for confirmation from the Saskatchewan Health Authority before declaring an outbreak.

“It took them over a week to declare this one, and now it’s spreading like wildfire through the school,” she said.

9:19
The exhaustion and emotional toll of being on Alberta and Saskatchewan’s COVID-19 front line

Current isolation policies require students exposed to COVID-19 outside the classroom are expected to stay home if they have symptoms.

Nystrom said kids should be isolating – whether they have symptoms or not. For example, her eight-year-old’s close friend now has COVID-19.

“His parents only tested him because of all the cases that were in the school, and found out he had it and he hadn’t had any symptoms,” he said.

A new survey from the University of Saskatchewan’s Canadian Hub for Applied and Social Research found nation-wide, more than one-third of Canadians do not trust other parents to keep their sick kids at home.

Researcher said it’s even higher in places like Saskatchewan where those surveyed were also less likely to support masking students and school staff.

“There tends to be a bit more distrust in the Prairies in terms of parents keeping their kids home from school,” said director Jason Disano.

It’s a worry echoed by teachers, according to the federation representing them.

The Saskatchewan Teachers’ Federation (STF) said school divisions have been left to work with local health authorizes on when to declare an outbreak.

But that can differ between the province’s 27 school divisions.

They added teachers are being stretched thin, with many juggling a mix of in-person and online students.

“It would make a lot more sense in those situations just to call it and say all students should move online until it’s safe to run class.”

Meanwhile, Nystrom said she’s worried about what will happen if a child gets seriously ill.

“With our healthcare system the way it is right now they’re not going to get the care they need,” she said.

She has tested her son with a rapid test kit at home and plans to keep him in online classes for the time being.