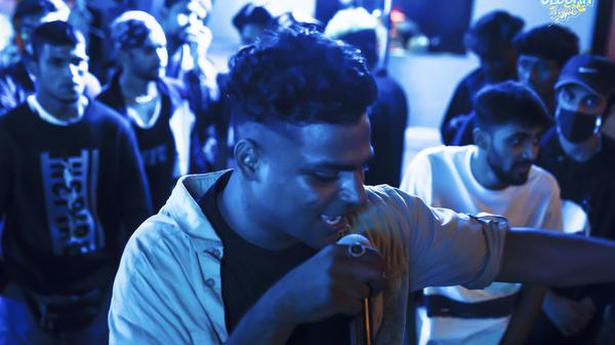 Post-lockdown, there is an unprecedented enthusiasm for hip-hop and rap as performers challenge audiences with live, electric performances

A regular alfresco Sunday dinner at Bounce in Kompally transformed into an electrifying evening when The Deccan Hype Vol 1 took the stage.

Diners were pleasantly surprised to see 15 artistes, two emcees, one DJ, and a range of rap battles such as Pass The Mic command the open entertainment space. After months of continual lockdowns, this high-octane energy was just what local artistes in Hyderabad had been waiting for.

As rappers challenged each other in the true tradition of Pass the Mic, the scene changed rapidly with the curious, appreciative crowd adding to the synergy. “They are going to rap in Telugu”, exclaimed a lady. A teenager yelled, asking for hip hop, while another boy begged his parents to wait so he could watch performers beatbox. As the artistes cheered each other on; the enthusiastic crowd spurred some artistes to perform a few of their unreleased tracks.

The vibe that evening indicates that the music scene in Hyderabad is opening up for local artistes who don’t do just covers. A few years ago, with no platform, the same artistes would meet up on Necklace Road and perform for each other, and a handful of curious onlookers and passers-by.

Discussing the growing audiences, Pramod Seshu, a member of Nawab Gang, a leading group of rappers, says, “Earlier we could not have thought of a gathering like this. We have two categories of audience — live and those who follow us online. While our online presence is strong, our live audience was not. This year, surprisingly, we have shows where people have come up to us, appreciating our lyrics and also admitting they had looked away from this music earlier. We are now invited to perform live sets at clubs and spaces we could not have imagined earlier; the entire community of rap and hip-hop artistes is overwhelmed!”

‘Promote our own talent’

Aside from Bounce Kompally, spaces such as Posh Nosh, Tabula Rasa and Moonshine Project (all in Jubilee Hills) have been actively promoting ‘make in Hyderabad’ events.

Ritesh Thodupunuri, a partner at Bounce says, “We have the artistes, we have the talent, so why look elsewhere. This genre of music is different but there is nothing negative about it. The artistes highlight a lot of issues around us. Even as they perform a live set in an open space, a few of them stress on wearing masks and staying safe. It is all about changing perceptions and offering the audience something new to appreciate.”

A couple of female artistes who took the stage at the event included rapper Sherni and hip-hop dancer Chandini Seth. Having given her first performance there, Chandni looks forward to performing more often.

Does Hyderabad’s warming up to rap have anything to do with the ‘OMG Daddy’ song in a blockbuster Telugu film? Popular Telugu rapper Feroz Israel says that Ala Vaikanthupuram cannot be entirely credited for it. “If movies introduced rap to Hyderabad, then Prabhu Deva’s Premikudu (1994) with ‘Petta Rap’ should get the credit. To say movies do not contribute would be wrong; they definitely help listeners relate to and identify with what we do.” Feroze recalls an event at Tabula Rasa where someone in the audience thanked him for opening his mind to ‘this music.’

A popular emcee, hip-hop artiste, rapper, live looper and beatboxer, Rahul Deval feels it is the quality of content that is making heads turn to this genre. Events like Cypher help and the change of platforms from rooftops to venues can be attributed to this current musical trend, he believes. Rahul says, “We probably started out when Hyderabad was not ready for this music. I remember having to give demos at clubs. Music lovers are warming up to a whole range of genres and hip-hop is definitely one of them.”

The strong community of hip hop artistes in Hyderabad recently held a fundraiser for a fellow artiste called Mutant who requires regular dialysis due to his spina bifida condition. When 21-year old Mutant is carried on to the stage to perform, his energy and style makes anyone’s head bob. Pramod shares, “The immense response to support him made us proud of our music and community.”

Sculptors under the spotlight – The Hindu