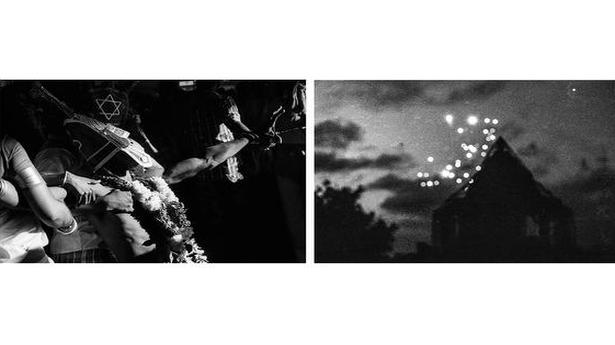 Arun’s very first borrowed Holga camera was often his only companion during long rides through screaming traffic on the East Coast Road. Sights typical of home, whizzed past him as he journeyed on his Enfield for hours at end: from paddy fields where women in rows, with petticoats tucked into their waists and bare legs sunk in mud, tend to the crop, to a forgotten 16th Century temple tank. This journey birthed Repressed Memories, a collection of vignettes that answers many questions that plagued Arun as a child, about his identity.

The self-taught photographer works extensively on film. Repressed Memories, created over a period of five years since 2016, is entirely shot on analogue cameras. And so, not only are the shots black-and-white, they are also imperfect. And that’s exactly what Arun loves about his practice: accidents.

“The project started from ECR, onto the inlands and to the mountains,” says Arun. Chennai, Puducherry, Tarangabadi, Karaikal, Rameshwaram, Thoothukudi, Madurai, Kovilpatti, Tiruchi, Thiruvannamalai, Yercaud, Gudalur, Udhagamandalam and Kotagari are some of the locations he covered. He shot people and animals in their environments: Their interaction with the landscape, and how they embrace loneliness amid chaos interested him. As a child growing up in the city, such scenes were alien to Arun which made him question how much he knew about his home.

“When I started, the project was very narrow; my observations were limited. Slowly, my narration and articulation evolved as diptychs and triptychs which made more sense to me. I feel that they speak more sense now,” says Arun. In one of the diptychs, a blurred frame captures a sky clad in fireworks and in juxtaposition stands a man who embodies a demon god in a temple festival.

He recalls the stop at Kulasekarapattinam in Thoothukudi. His focus was on the Kulasai Dasara festival where lakhs gathered in its pre-pandemic years. “It’s very chaotic. I remember capturing the interaction of a husband and wife: she was helping her husband put makeup on. Such quiet moments make me curious,” says Arun.

He discovered the beauty of out-of-focus, shaken images purely by accident. Since images can be reviewed only once they are developed, unlike in a digital camera, there is scope for surprises. “Once I discovered why it is happening, I started doing it on purpose. Here, I know what I am taking but such accidents make the process more organic,” he recalls. “In analogue, you keep thinking. You load, take pictures, develop and scan — there is no moment when you can forget about your work,” says Arun. “There are no gaps.”

Repressed Memories travelled to Angkor Photo Festival in Cambodia in late 2020 and is now getting its second gallery display in Auroville at Centre d’Art Gallery.

The exhibit will be on display at Centre d’Art Gallery, Citadines, Auroville till October 2