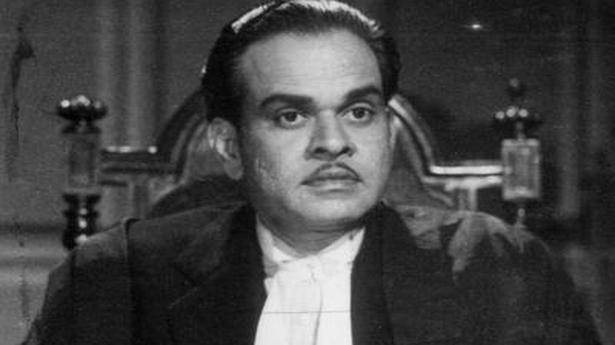 September 11 marked the death centenary of poet Subramania Bharati (though it says September 12 on the official death certificate). His works, which spanned a wide range of subjects such as nationalism, philosophy and society, have inspired the world of arts and found representation as songs in movies and theatre productions, thematic dance presentations, and vocal performances. One of his most famous works was Panchali Sabadham, reproduced as a play by theatre legend S.V. Sahasranamam’s Seva Stage.

Born in Singanallur in Coimbatore in 1913, Sahasranamam took to theatre at an early age, joining the Bala Shanmukhananda Sabha which in its later avatar would become the T.K.S. Nataka Sabha run by T.K. Shanmugam and his brothers. Making his movie debut with Menaka in 1935, Sahasranamam went on to have a film career spanning more than four decades, becoming one of Tamil cinema’s best known character actors. Theatre, however, remained a constant companion in his journey; he founded his drama troupe Seva Stage in 1952, ushering in an era of experimentation in Tamil theatre with social themes as its focus.

The first play staged by the troupe was Kangal, which was the Tamil adaptation of Rabindranath Tagore’s short story Vision. This was followed by another experimental venture, Irulum Oliyum, which had four actors and four scenes. He experimented with a revolving stage for his next play Vaanavil, a novelty for Tamil theatre. Sahasranamam also got noted writers from the world of Tamil literature such as B.S. Ramiah and Thi. Janakiraman to write plays for the troupe, which had several well-known film actors such as Muthuraman, Devika, S.N. Lakshmi and Pandari Bai on its rolls. In 1957, he founded Seva Stage Nataka Nilayam, a drama school to teach theatre to aspiring artistes.

In his memoirs, Thirumbiparkiren, Sahasranamam says he had great love for Subramania Bharati’s works and used to read Panchali Sabadham frequently. It occurred to him that the powerful language used in the work would make for an apt lesson in diction for the students of his drama school. So he worked on a version where he retained only the conversations between the various characters, eliminating the general portions of the work. With B.S. Ramiah’s inputs, the project took shape. Sahasranamam then introduced elements of acting into it to teach his students, along with the proper pronunciation of the verses.

T.K. Shanmugam, a visiting faculty then, saw the training one day and suggested to Sahasranamam that it could well be made into a full-fledged poetry-drama performed by Seva Stage itself. Around this time, the Tamil Nadu Iyal Isai Nataka Mandram had decided to conduct a drama festival with four types of plays — historical, mythological, social, poetry-drama. Shanmugam proposed staging Panchali Sabadham under the last genre and was accepted.

The script with verses from Panchali Sabadham was written by B.S. Ramiah. During the rehearsals, Sahasranamam arranged for sessions where poet Tiruloka Seetharam addressed the actors and discussed the nuances of the verses. He also invited playwright S.D. Subramania Yogi to speak about how poetry-drama was performed abroad. All these sessions proved extremely beneficial to the actors.

The play was inaugurated on February 15, 1959 at the Congress Grounds and was a huge success. Muthuraman played the role of Duryodhana, while A.K. Veerasamy, a senior troupe member, played the role of Dhritarashtra. N.R. Shanthini from Kerala played Draupadi, while Sahasranamam took on the character of Subramania Bharati. In later shows, Sahasranamam played Yudhishtra. After Shanthini, the role of Draupadi was played by film actor Gandhimathi for a long time. Justice M. Karpagavinayagam, former Chief Justice of Jharkhand, who was a member of Seva Stage in his student days, also acted as Bharati and Arjuna in subsequent shows.

The play was staged across India. It was later recorded in Delhi Doordarshan Kendra, becoming the first Tamil play to be televised. It was also staged at the Tagore Centenary Celebrations in Calcutta. When Sahasranamam led a cultural delegation to Russia in 1960, he took with him an audio version of the play, which was given to the Moscow radio station. He later learnt that it was broadcast twice.

In 1968, Sahasranamam was awarded the title of ‘Bharathi Kalaignar’ during a performance of the play in Tiruchi. Of all the awards and accolades that he received, this was the one he cherished the most till his death in 1988.

gave inputs for this piece.