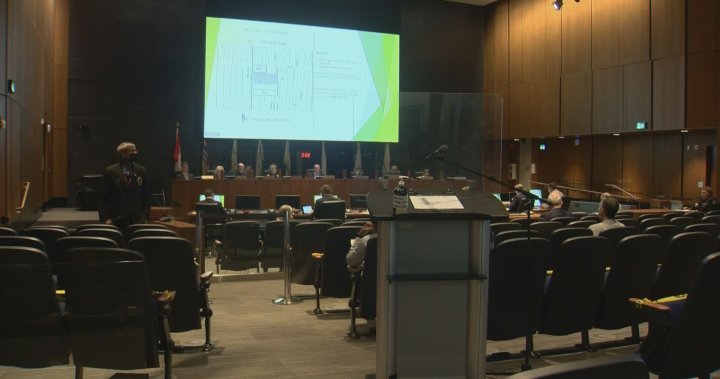 B.C.’s municipal affairs minister has waded into the fray between Surrey city council and a group opposed to the city’s transition from the RCMP to a municipal police force.

Municipal Affairs Minister Josie Osborne says it’s important for all local governments to be respectful and conduct their business in an appropriate way.

On Monday night council adopted a resolution to prohibit several members of the Keep the RCMP in Surrey group from physically attending council meetings or participating remotely.

2:19
Surrey mayor accused of a ‘attack on democracy’ for banning certain speakers from council meetings

Surrey Mayor Doug McCallum said the move was made to protect the democratic process. The individuals were accused of repeatedly being disruptive and verbally harassing council and staff during public hearings.

Coun. Brenda Locke, who will run against McCallum in next year’s municipal election, called the move “unprecedented,” saying McCallum and his Safe Surrey Coalition are refusing to listen to legitimate concerns of those questioning the transition to a municipal police force as well as those who oppose putting a road through Bear Creek Park.

Osborne, waded in, saying local governments need to follow legislative rules, provide transparency, and hear from a variety of views.

“I think it’s really important to emphasize the fact we need to be respectful when we conduct our business at a local government level and all local governments need to adhere to the legislative rules that are in place,” Osborne said.

“They have to conduct meetings that uphold principles of good governance and that includes transparency and providing opportunities to hear and consider different perspectives.”

Hamish Telford, associate professor of political science at the University of the Fraser Valley, says he’s surprised by the emotion surrounding the policing transition.

“I don’t quite understand why people are so emotionally attached to having the RCMP in their community rather than municipal police force especially when mayor and council ran on this in the last election,” said Telford, who also questioned the legality of banning anyone from attending a council meeting.

Those banned from speaking at Surrey council will now have to submit their questions and comments in writing.