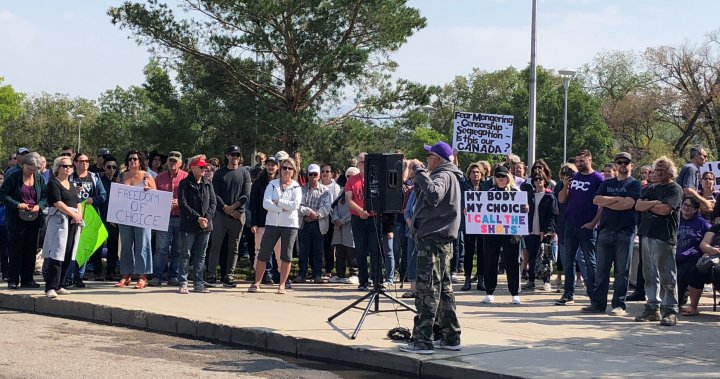 A group of around 40 protesters and counter-protesters took a slightly different approach at Saskatoon City Hospital protest Monday afternoon.

Those in attendance chose not to block key entrances and instead shared their concerns in what they called “a silent vigil” behind the hospital for health-care workers being mandated to get vaccinated against COVID-19.

“We’re putting them in a position to choose their career over a vaccine they don’t feel comfortable with,” protester Mark Friesen said.

Friesen is a well known local voice in the calls against mandated vaccines. He is also a Peoples Party of Canada candidate.

He said at Monday’s protest he also doesn’t support alternative masking and testing protocols like those in place at universities for people who are uncomfortable getting vaccinated.

“It’s disgusting and it’s not acceptable,” said counter-protester Kent Allen. “And — as it happened today — they should be moved away from the front of the hospital.

“[Health-care workers] have a job to do. People are relying on them, some for their very lives.”

Some of the counter-protesters criticized the motives of these protest groups.

“A lot of people are using this for political leverage; as you know we’re in a federal election,” Allen said.

Virologist Jason Kindrachuk says the mandates are a response to vaccine hesitancy at a critical time when cases are climbing.

“If you want to combat vaccine mandates, then promote people getting vaccinated, Kindrachuk said.

“We’re in a situation right now where we can’t get kids under 12 vaccinated. We know that the herd immunity threshold is extremely high for Delta and we’re not there yet.”

Saskatoon’s hospital protest is one of several taking place across the country this week. Counter-protesters say they are hoping the respectful distance from hospital entrances will be maintained for future protests.