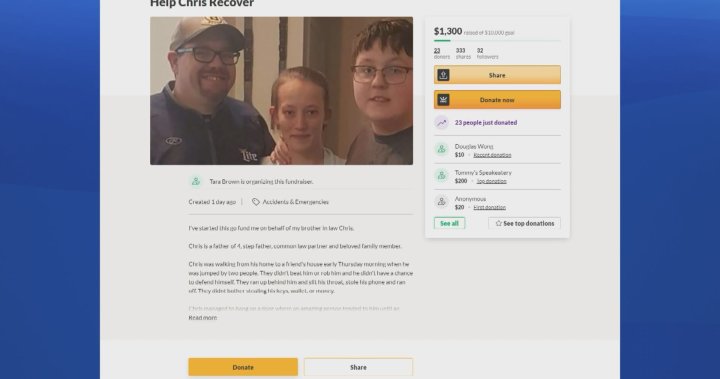 A man and his family are shaken after his throat was slit with a knife by two complete strangers, during a walk home from a friend’s home, according to a family member.

At 5:30 in the morning on Thursday, Regina police received a report of a man with a serious neck injury in a residential area in the 1300 block of Athol St.

“His condition in the beginning was really bad, doctors didn’t think he would make it, but he’s a fighter and proved them wrong,” Tara Brown, the sister-in-law of the victim told Global News.

As of Monday evening, Chris, the victim of the attack remains in hospital and is recovering, he’s had to get staples on his neck due to his wound.

According to a press release from the Regina Police Service, Chris was walking home from a friend’s house on the 1400 block of Montague St. when two men he didn’t recognize attacked him.

RPS says a brief altercation occurred prior to the murder attempt. The two suspects took his phone, but not his keys, wallet or money, according to family.

Brown believes a stranger in a nearby home who answered Chris’ call for help, is one of the reasons he is still alive.

She says the individual stayed with him, applying pressure on his wound with a towel until an ambulance arrived.

“He lost a lot of blood and he managed to get to somebody’s house and banged on the door, thank you to whoever answered that door because you saved his life,” Brown said through teary eyes.

“When he got to the hospital, he had a blood transfusion and he had surgery,” she added.

Brown started a GoFundMe page for Chris to help with extra medical costs brought on by the unexpected attack, such as counseling and physical therapy, along with a pair of new glasses.

She says Chris’ glasses were broken during the incident and that he does not have any benefits to help get him through the recovery process.

“He is an awesome, genuine guy, like he is a father of four, he’s a step dad to my nephew, common-law partner, him and my sister have been together for five years,” Brown said.

“Everybody loves him, like I don’t understand why someone would do this to him,” Brown added.

Global News reached out to RPS for an interview on the case, but the request was denied. On Monday afternoon, RPS said there is no new information in regards to the case to share with the public.

Although, in a release from last week, the police said the investigation is ongoing and the two suspects remain at large.