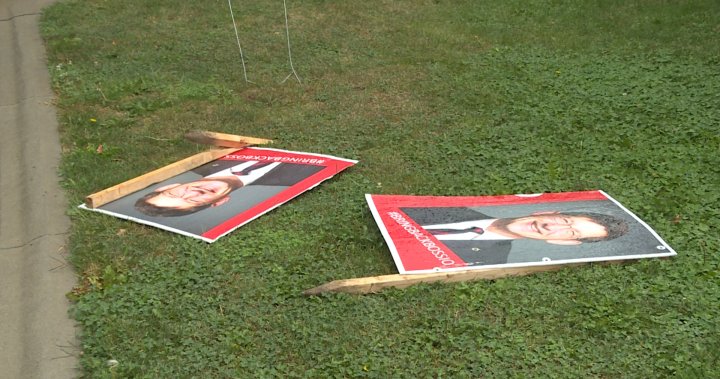 With the final stretch upon them, campaign volunteers and candidates continue to work to reach voters.

One way is through signage along roadways and on private properties. But, some of those signs are being vandalized.

Read more:
Liberal candidate’s car vandalized on his property while his family slept

“One night we had shotgun shells going through one sign,” says Paul Proderick.

Proderick is volunteering as a sign coordinator with Mike Bossio’s re-election campaign in Hastings—Lennox and Addington.

“ATV’s running them over. Now in the last two or three days, they’re literally just disappearing, they’re not even broken and laying on the side of the road,” he continues.

And Proderick doesn’t think these instances are one-offs.

“There’s a sign behind me that I’ve put up four times on the corner of Coronation and Taylor Kidd. First time it was just knocked down, second time it was run over by an ATV, you could see the tracks clearly over top of it,” Proderick says. “Third time, the legs on the thing were broken right off and then the fourth time it was literally split down the middle and just left there.”

The Hastings—Lennox and Addington riding isn’t the only one being hit by vandals.

Leeds-Grenville-Thousand Islands and Rideau Lakes Liberal candidate Roberta Abbott says she is shocked and surprised by the vulgar language spray-painted onto her campaign signs.

“I didn’t expect something like that to happen in Leeds-Grenville,” she says.

Abbott has been the subject of hateful vandalism that includes insults to her gender.

“I mean, it’s a cowardly, misogynist thing to do. But, it in fact just makes me more determined to continue to be in politics,” says Abbott.

Gender-specific insults aren’t new to women in the world of politics.

“Sadly, something that women in politics have to deal with. And it shouldn’t be the case, but there are people who feel that they want to frighten women out of being part of the political discourse, and that’s just not going to happen,” Abbott says.

Proderick is responsible for fixing the broken and stolen signs in his riding and says he will continue to do so.

“Whether people knock our signs down, or another candidate’s signs down, we’ll be back the next day to put them back up,” he says. “So you’re wasting our time, but even more importantly, you’re probably wasting your own time.”

Interfering with election signs is an offence under both the Criminal Code of Canada and the Elections Canada Act.