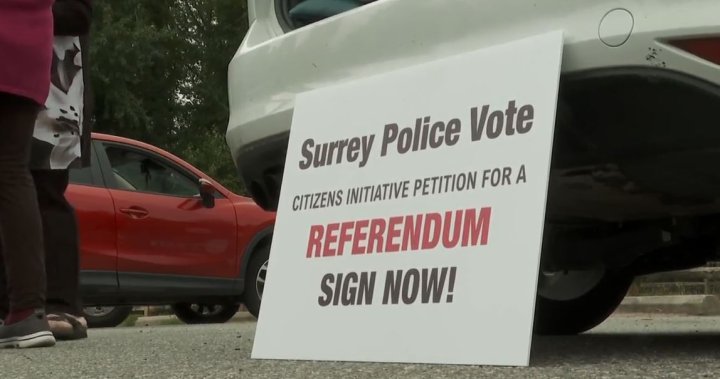 An advocate in favour of a referendum on the future of policing in Surrey, B.C., says he was issued a bylaw ticket on Saturday.

The Surrey Police Vote group is trying to collect 37,000 signatures by mid-November. If it garners enough signatures, it can ask the province to hold a referendum asking Surrey residents whether they want to keep the RCMP or transition to the Surrey Police Service, an option supported by Mayor Doug McCallum.

One petition volunteer says he was issued a ticket by bylaw officers in Dogwood Park on Saturday.

“They took great exception to the fact that I had this sign at the back of my car, they said I was in contravention of bylaws,” Paul Daynes said.

Coun. Brenda Locke, who will run against McCallum in next year’s municipal election, called the incident “unfortunate.”

“I think it’s quite a stretch of the imagination to look at the bylaw that they claim was broken,” Locke said. “I don’t believe that has ever happened before in Surrey.”

Last weekend, McCallum allegedly got into an argument with volunteers outside a local grocery store. He claims one woman drove into him.

Canvassers feel the mayor’s accusations against them are not hurting their cause. A statement from the group said the initiative has been approved by Elections BC and they have collected more than 10,000 signatures.

“Despite the best efforts to harass, intimidate and bully people…the interest is phenomenal,” Daynes said.

Global News has reached out to the mayor’s office for more information.

— With files from Amy Judd