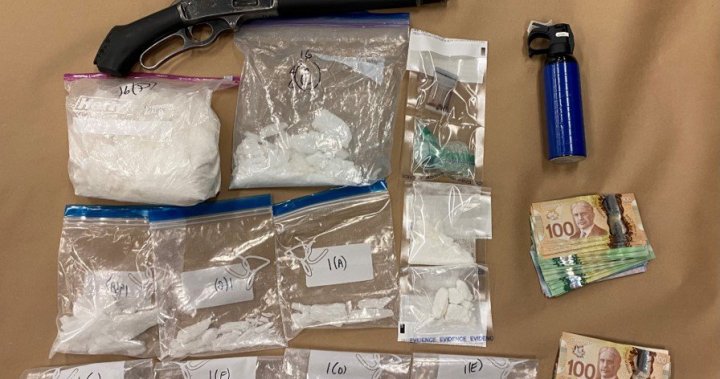 A man and a woman are both facing multiple charges after a joint investigation by the Saskatoon Police Service’s Drug and Guns & Gangs units.

Read more:
Over 6 kilos of meth seized by Saskatoon police after homes searched

Following an investigation where “police observed activity consistent with drug trafficking” a man was arrested outside a home in the 200 block of Avenue X North on Thursday. A search warrant was executed at 5 p.m. that same day where police say they found methamphetamine, cash, fake ID’s, cell phones, a firearm and a collapsible baton.

During the investigation, 1.5 kilograms of methamphetamine, $9,550 in cash, 52.6 grams of crack cocaine, 15.7 grams of MDMA and a prohibited firearm were all seized.

A 24-year-old woman was also arrested, found to be in possession of methamphetamine, cash and a can of bear spray, police say.

She faces charges of possession for the purpose of trafficking methamphetamine, possession of proceeds of crime under $5,000, possession of dangerous weapon and carrying concealed weapon.