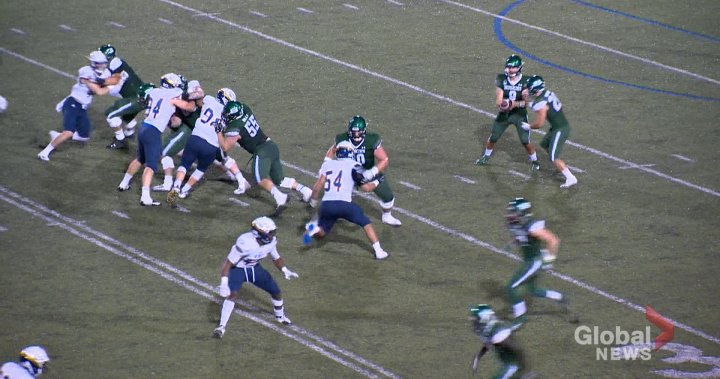 In early September a pair of Huskies football players made the annual fall version of the CFL Scouting Bureau’s top prospect rankings.

The list outlines the top 20 collegiate athletes eligible for the 2022 CFL Draft.

The top ranked Huskie at 18th, standout running back Adam Machart, is no stranger to being acknowledged for his prowess on the gridiron.

In 2019, the then 22-year-old broke the programs single season rushing record with 1,331 yards on the ground.  That performance made him runner-up for the Hec Crighton Trophy, awarded to the best Canadian college football player in USports.

While also taking home the Canada West player of the year title, was named a USports All-Canadian, and a Canada West first-team all-star.

Even with all the those accolades, don’t expect Machart to rest on his laurels heading into the upcoming season.

“You gotta keep your eyes looking forward,” Machart said. “You know, at the end of the day that was two years ago. So, I gotta make sure that I’m doing my part, making sure that I earn that ranking going forward, not living in the past.”

“He seems to be even more explosive,” head coach Scott Flory observed. “(He has) more depth of understanding of the playbook, and comfort with all that.”

Clearing a path for Machart over the last two seasons has been offensive tackle Noah Zerr.

The six-foot-seven-inch Langenburg, Sask., native also made the prospects ranking list, coming in at 20th.

However, just like his teammate Machart, the ranking won’t change Zerr’s approach to the coming season.

“I’ve worked really hard in my time here with the Huskies,” Zerr said. “I’m glad to be on the list, but as far as I’m concerned it’s just a little feather in my cap.

The dynamic that is shared between Zerr, the rest of the offensive line and their back, Machart, makes sharing the ranking experience with him that much more special.

“I’m glad I could help him where I could,” Zerr said. “I’m glad that we do have that symbiotic relationship. I think that’s important, and it’ll be huge going into this season.”

It’s a relationship that will only continue to grow between a pair of motivated players, both looking to build on last season’s success.

“(If) someone gives you that honour, it’s like, OK, let’s prove it, or let’s move myself up the ladder,” Machart explained.