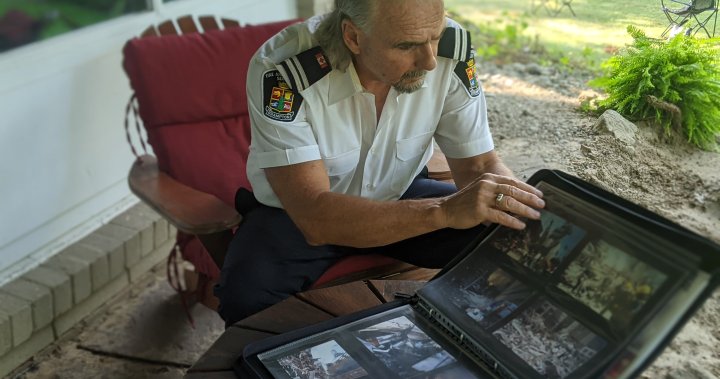 Ontario firefighter Neil Kennedy can still recall with clarity the frantic drive he and three other colleagues made to Manhattan, 20 years ago on Sept. 11, 2001.

For the retired Brampton Fire captain, it’s hard to fathom so much time has already passed.

Sitting in his backyard, he carefully scans the pages of an old album. It contains a collection of haunting images from inside Ground Zero.

The morning of Tuesday, September 11, 2001, Kennedy was teaching CPR and first aid to high school students in southern Ontario.

“The principal came in, and pulled me out of the classroom and said, ‘Yeah, we’ve got a scenario. Looks like a private plane flew into the World Trade Centre,’” Kennedy told Global News.

At 8:46 a.m., American Airlines Flight 11 was flown into the North Tower at the World Trade Centre, crashing into floors 93 through 99.

Less than 20 minutes later, the South Tower was struck by United Airlines Flight 175. The commercial airliner slammed into floors 77 through 85.

In a matter of moments, it had become far more evident that it was no accident.

“I was on holidays, so I had no commitments,” recalled Kennedy. “I knew I could drive to this event, because you certainly couldn’t fly. They had shut the airspace down.”

He reached out to his colleagues, hoping to find willing volunteers.

“First three guys who say yes, that have the time off, that’s the crew of four. That’s all I could fit in my car.”

5:54
Calgary’s The Military Museums to commemorate the 20th anniversary of 9/11

Tensions were high, and there were still many unknowns about the attacks that transpired, including whether it was truly over.

The Canadian contingent left Toronto at 5 p.m., unsure whether their help would be welcomed by the Americans.

“It was heavily armed with military from the United States,” Kennedy recounted of the land border that afternoon.

They arrived in Manhattan around 7 a.m. Wednesday, met by roadblocks and a heavy police presence.

Sidewalks normally bustling with foot traffic, and bumper-to-bumper streets were now barren. Much of the area was sheathed in ash and dust.

The group identified themselves to officials on the ground. They had only their gear and uniforms with them.

They were taken to Firehouse, Hook & Ladder Company 8 in Tribeca, and assigned to a crew.

“We get to Ground Zero, and there was an archway. So as soon as you get through, this is our entry point,” said Kennedy. “And the first thing we saw was a fire truck cut in half, upside-down.”

Kennedy said the debris field from the collapse of the Twin Towers was massive.

The buildings themselves were part of the 16-acre commercial complex known as the World Trade Centre. It was comprised of seven buildings, an underground shopping mall, and a sizeable plaza.

“You’re not sure what you’re walking on,” he said.

In the end, it wasn’t lost on Kennedy or his colleagues just how grateful New Yorkers were for their presence.

“I’d be walking down, and we had a couple of homeless gentlemen come up to us, and say, ‘Here’s my money for the day. Collection.’ It was like, ‘No buddy. No, no. Thank you, but no.’”

Kennedy and his colleagues remained in New York for close to a week.

READ MORE: How many Canadians have fallen victim to terrorism?

He retired from Brampton Fire and Emergency Services in 2018, but continues to provide vital training on fire prevention and safety.

While Kennedy won’t be able to attend the upcoming commemoration ceremony in New York, it’s a moment in time forever etched in his mind.

Forty per cent of those who died remain unidentified.