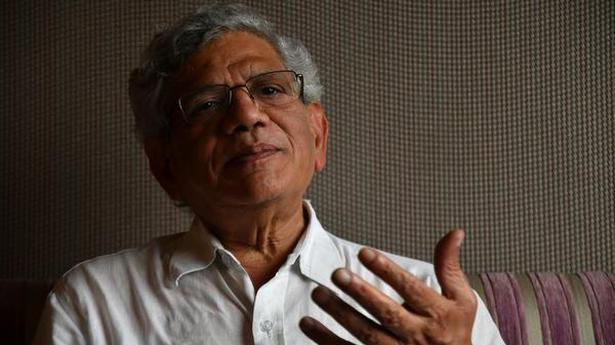 CPI(M) general secretary Sitaram Yechury, in a letter to Prime Minister Narendra Modi, has demanded immediate action against the BJP government in Tripura for the alleged pre-planned attacks on CPI(M) offices across the State which, according to him, were carried out with connivance of the government.

The CPI(M) would organise a protest in the capital on Friday on the issue.

The most brazen attack, Mr Yechury said, was on the State committee office in Agartala. “They have ransacked the ground and first floors of the office, burnt two office cars and broken the bust of Dasarath Deb, a revered leader of the people of Tripura,” he stated.

The party has claimed that houses of many leaders and activists of the CPI(M) were attacked, ransacked or set on fire. The office of newspaper Daily Desharkatha, which is supported by the CPI(M), was also damaged.

“It is to be noted that the police who were present at many of these venues remained silent bystanders. In the case of the State committee office, some CRPF jawans were present in front of the office but they were withdrawn an hour before the attack began,” Mr Yechury mentioned in his letter.

He went on to blame the BJP, saying these attacks took place because the ruling party had tried and failed to suppress the activities of the main Opposition. “The impunity with which the attackers operated shows the connivance of the State government,” he wrote.

The State government had grossly failed to discharge its constitutional responsibility of maintaining law and order and was trampling on the constitutional rights of the Opposition to organise political activities in a peaceful manner, he added.

CPI general secretary D Raja also spoke to the former Chief Minister and CPI(M) leader, Manik Sarkar. “Left is being targeted by RSS-BJP. Such intimidation will not be tolerated & will be opposed by all progressive forces,” he tweeted.