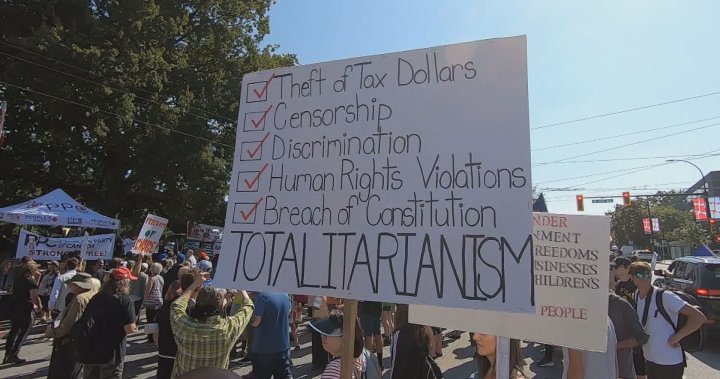 A protest against vaccines and vaccine passports took place in Vancouver on Wednesday, although with fewer people in attendance than a rally held last week.

Amid the protests, some leaders in B.C.’s hospitality industry have expressed concern about what might happen when the province’s vaccine card plan goes into effect next week.

“There’s been a lot of ads about this, the government has been quite clear about what’s going on,” Jeff Guignard, executive director of the Alliance of Beverage Licensees, said.

“If people are showing up and they don’t have a vaccine passport prepared, we know that they’re coming to pick a fight, and that’s fully unacceptable.”

“You will see in every restaurant and bar in British Columbia a sign that says, ‘By order of the government and by order of the provincial health officer, we have to do this,’” Ian Tostenson of the BC Restaurant Association said.

The jury is out on whether the process at the door for restaurants and bars checking vaccine cards will be straightforward or problematic. Bars and nightclubs may have an advantage as they have staff already checking IDs.

“There are some restaurants that don’t have greeters and they’re going to have to put people in,” Tostenson said.

Some businesses may hire security guards to avoid confrontations.

“We’re getting a lot of inquiries,” Michael Jagger of Provident Security said. “You don’t want to take abuse for just doing what the law says they must.”

On Tuesday, B.C. Premier John Horgan hinted the province could help businesses with some of these new expenses.

Andrew McWilliam of Ratio Coffee & Pastry in Vernon, B.C., says his business has been subjected to bogus one-star online reviews and abusive comments on social media after stating they will follow the rules set out for a restaurant like his.

He says that the public can play a part in supporting local businesses that are playing by the rules.

“There are lots of restaurants, lots of chains too, that are doing many, many of the right things and trying to protect their patrons and their staff,” he said. “So reward them with good reviews and drown out the negativity with positivity.”