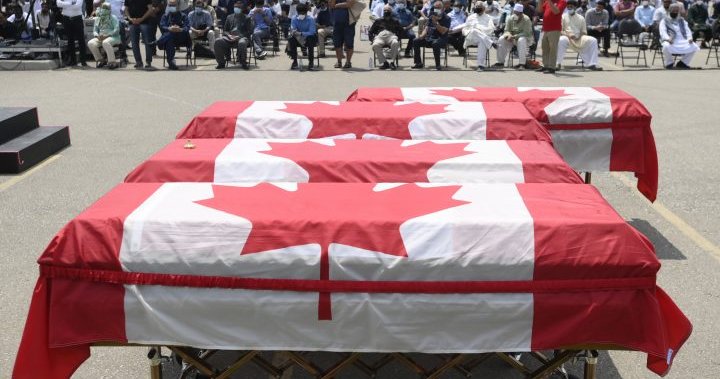 At 3 a.m. on August 18, a man on a bike stopped beside the minivan parked on Aarij Anwer’s driveway in London, Ont., opened the driver’s door and stole the contents.

Only gloves and gift cards were taken, but when Anwer watched video of the incident, which was captured by his home security camera, he felt uneasy.

While once he might have dismissed it as a random crime, everything changed after the June 6 killing of four local Muslims out for an evening stroll, and Anwer couldn’t help wondering if he’d been targeted because of his faith.

“I wouldn’t have felt that in normal times,” said Anwer, who is the imam of the London Muslim Mosque. “This is what I’m going through.”

It’s what many are going through in the city after police alleged a 20-year-old egg factory worker deliberately rammed a Muslim family with his pickup truck.

The attack has left Muslims looking over their shoulders, mosque leaders said. Congregants worry the mosque could be targeted. Parents are apprehensive about sending their kids to the mosque school.

While some have moved on, many are struggling, Anwer said. They pass the sidewalk where it happened and it gives them pause. They are feeling uncomfortable and uncertain.

A husband and wife were killed, as well as their daughter and mother, while their nine-year-old son was injured. But the impact has been felt more widely.

Terrorism is, after all, meant to terrorize.

“It’s been very difficult for the community,” Anwer said.

Terrorism has come home over the past four years. Since 2017, 22 have been killed and 44 injured in more than a dozen attacks in Canada that were at least partly linked to extremist ideology.

But according to victims of terrorism and advocates, the federal government’s response has been unco-ordinated and inadequate, and better support is needed for those impacted by terrorism.

Both the imam and the chair of the mosque said they had received no federal help to deal with the aftermath of what prosecutors are alleging was an act of domestic terrorism.

But the federal government has not provided any assistance to deal with the impacts of the incident, mosque officials told Global News in interviews.

Community members are anxious because police have alleged the Afzaal family was targeted because they were Muslims.

There are also worries because the alleged killer, Nathaniel Veltman, was arrested near a mall close to the mosque.

To ease fears of another attack, the mosque has spent tens of thousands of dollars on security, and hired a consultant who produced a report more than 100 pages long that recommended security improvements.

The mosque leaders said they had been too consumed with the immediate crisis to look into federal programs that might help them and submit applications for funding.

As a result, they received none of the almost $2 million made available to fight Islamophobia. The mosque said it was not even told it could apply for a federal grant to improve its building security.

“We would have appreciated it a lot if we were kept in the loop, or somebody came to us and said, ‘You know, these grants are available, we can help you with the application,’” said Bilal Rahhal, the chair of the London mosque’s board of directors.

Even better, federal officials could have skipped the formal application process and provided the necessary funding because the community was dealing with a crisis, he said.

In addition to funding for security, the community could use help with the mental health issues arising from the attack, said Rahhal.

“We didn’t see, from the government, anything about that.”

He said it would be a “great idea” if a federal agency was ready to step in following incidents like the London attack, and offer up the assistance needed by the victims and broader community.

Governments helped with the vigil and funerals, he said. “But it would have been nice if we got real help on the financials, on the funding, on what kind of grants that we can have access to,” he said.

But the impacts can linger long after an attack fades from the headlines.

Terrorist attacks are associated with higher rates of PTSD, depression, anxiety and psychological disorders, and the symptoms can last longer, according to the Canadian Resource Centre for Victims of Crime.

Terrorism “can fracture citizens’ sense of security, leaving victims, the wider community and society with a sense of enduring vulnerability and terror,” reads an April 2020 report by the United Nations secretary-general.

“Victims of terrorism have a broad range of needs, including for physical, medical and psycho-social support, and may require immediate as well as long-term rehabilitation to address trauma and build resilience.”

Heidi Illingworth, the Federal Ombudsman for Victims of Crime, said terrorist attacks “are meant to cause fear and terror in as many people as possible.”

Unless victims get the support they need to carry on, “then we’re letting these extremists succeed in what they’re trying to do.”

The attack was only three months ago and time will help, Imam Anwer said. But he said changes could be made, such as a better way for victims to report hate incidents to police.

“You don’t want to be bouncing from voicemail to voicemail, extension to extension,” he said.

Better support for counselling was also needed, he said. Local non-profit organizations that are qualified to address those who need to talk about what happened were already swamped, he said.

“They need to talk about what they’re feeling,” he said. “I cannot be the person to do this. I’m not a registered counsellor. I can provide pastoral care, but we need a lot of that void to be filled.”

“And the resources that we have here — there’s a Muslim Resource Centre, there’s a few Muslim-oriented mental health organizations — these people are already at capacity.”

“So we need funding to expand their services so people have a place where they can just go and talk to therapists, talk to a counsellor,” he said. “These services are there, but they have to be scaled up, especially in the time of a crisis.”

The imam recalled sitting in his office after the attack, preparing his speech, and at the same time writing out a list of phone numbers people could call if they needed support.

He said that kind of list should be created and distributed, so that those who were struggling would know where to go for mental health services or counselling.

“That’s really a solution that will be very helpful here,” he said.

“You know, the government, we appreciate their presence at the vigil. It meant a lot for the prime minister to be here and for all the MPs and all the parties, frankly, to show up and support us in that moment, it means a lot,” he said.

But he said services oriented towards victims of terrorism should be made available immediately following attacks, just as emergency funding is provided after natural disasters.

“This is something that is similar, right? The funding for this should be discharged in an emergency manner. These services are brought up to speed, immediately scaled where they need to be scaled.”

The federal government has funded long-term projects to address anti-Muslim hate but has not addressed the “immediate ripple effects that we’re seeing here,” he said.

His worry is that people will isolate themselves as a result of the London attack, fearing that identifying themselves as members of the Muslim community will put them at risk.

“This is a real concern. People are just going to distance themselves and kind of go into this shell, just cope with this,” Anwer said.

“This is something that cannot be overstated, how disastrous it will be for the long-term health of this community.”

Next: In Part Four of this series on victims of terrorism, the story of a 9/11 widow’s search for justice.