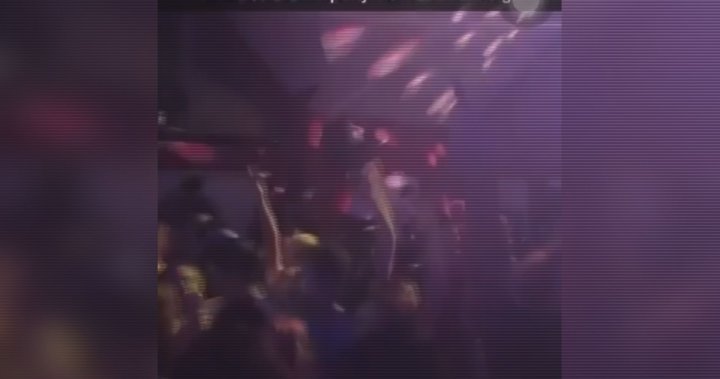 A UBC student says dozens of people who attended an indoor frat party on campus last week have tested positive for COVID-19.

The student, whose identify Global News has agreed to conceal because of fear of backlash, said her friends were at that party.

“At least 200 people have symptoms or have gotten tested and are positive,” she said.

“There are talks they’re going to keep their diagnoses a secret so they can attend their classes and they won’t have to miss out on any first-week events and they don’t want to face any repercussions from the university itself.”

Vancouver Coastal Health has not confirmed any of these details. As of Monday, the health authority did not have any information about any possible superspreader event.

University RCMP officers shut down a party at the fraternity village on Wesbrook Mall on Aug. 29 after they found students gathering in the courtyard and inside several homes.

Few were wearing masks, the crowd was bigger than the allowable 50 people, and physical distancing was not possible, police said in a statement.

The event had also been advertised on social media, and a video of the partygoers had been posted online.

Officers issued $5,000 in fines for hosting a non-compliant event.

“We are asking that students ensure they observe all public health orders. We have worked hard to get this far over the past (18) months. Let’s stay safe and healthy,” Const. Christina Martin said in a release.

In a statement Thursday, UBC vice-president of students Ainsley Carry said all students are expected to follow provincial and campus rules regarding COVID-19.

Meanwhile, a huge outdoor party at the University of Victoria on Sunday night raised questions about a lack of COVID-19 restrictions.

Saanich police said about 1,000 people — most of them without masks — were crowded together.

As there are no current restrictions on outdoor gatherings, wearing masks outdoors or physical distancing, police said officers only issued two tickets for liquor violations for underage drinking.

The university, however, asked students to “act responsibly and not gather in large numbers.”