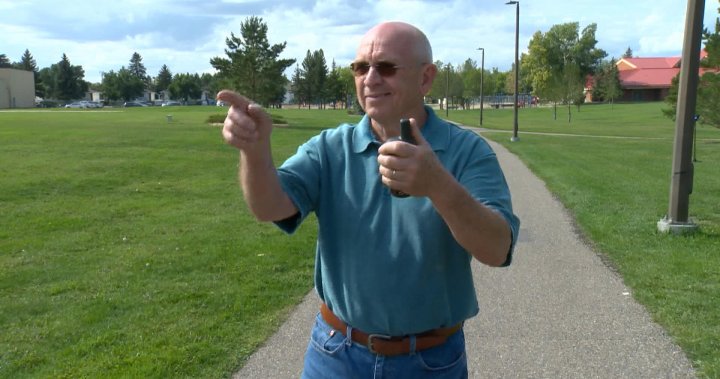 The COVID-19 pandemic has altered the way many of us go about our everyday lives.

For Blake McQueen, it simply forced him to get creative in staying active and keeping his mind occupied with some semblance of routine.

The 68-year-old recently retired aircraft engineer was looking for a means to stay active during the lul time of the pandemic.

He goes on a daily walk usually in parks near to his home in Saskatoon’s Silverwood Heights neighbourhood.

The pandemic made him think up a COVID challenge where he would walk all of the Bridge City’s parks.

“I’m a big fan of classic cars and car shows and there weren’t many of those going on,” said McQueen. “That kind of forced my hand in coming up with the idea.”

According to the city of Saskatoon, there are over 200 parks throughout the city.

McQueen started his journey on April 21 and completed all city parks by Aug. 23.

Erin McCormick, his daughter, says it’s not a surprise Blake did something like this. He is always looking for a way to stay busy.

“I thought it was a great idea,” said McCormick. Just speaks for him keeping fit and a good personal goal. He likes to make lists, check things off and being organized, on top of being super discipline.”

The most parks he walked in a day was eight. With smaller parks, he explained how he’d visit one, then move on to the next, in order to check off as many parks as he could and keep on schedule.

McQueen, who is retired, would walk the parks either by himself or accompanied by his wife, son or grandchildren.

“There was a good sense of accomplishment when I completed the last one,” shared McQueen. “I was glad I did it, but then I wondered, ‘What am I going to do now?’”

Now that he’s concluded his challenge, McQueen thinks he will go back to hiking parks in his area or maybe visit parks in nearby communities like Warman or Martensville.

His daughter says hopefully more people will follow suit and pursue something similar to this COVID challenge.

“It’s really motivating and inspiring for people who might have experienced a loss of activity or commitment because of the pandemic,” McCormick added.

However, it’s safe to say if you happen to tour through one of Saskatoon’s many city parks, there’s a chance you’ll spot McQueen walking, too.