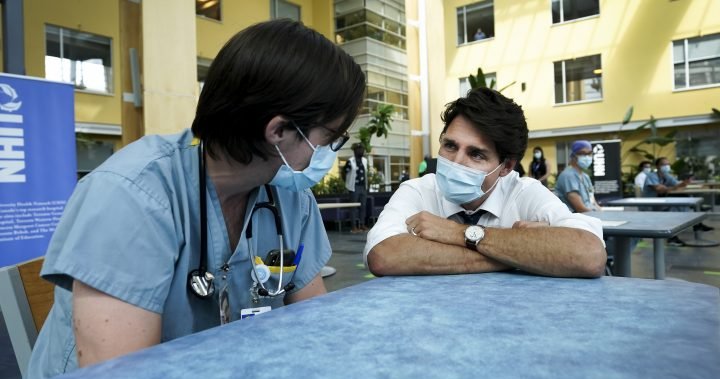 Health-care workers shared concerns over staff shortages and burnout with the federal Liberal leader during a Sunday campaign stop at a Toronto hospital that was surrounded by anti-vaccine protests earlier in the week.

Justin Trudeau thanked the few dozen Toronto General Hospital staffers for their efforts during the COVID-19 pandemic and called the protests against proof-of-vaccination systems “horrifying.”

“I want to tell you, all of Canadians stand with you. People know how hard you work, how much you sacrifice, to do this unbelievably important work of keeping us safe,” he said. “I, for one, will always be there to have your back.”

Trudeau pointed to his party’s pledge to mandate vaccination for federal employees, which he said will help encourage the hesitant — who are now filling the city’s intensive care units again — to get their shots.

Intensive care nurse manager Denise Morris, who said she stayed on past retirement age to see her team through the pandemic, said she thinks all candidates should visit the front-line workers who have faced the new disease head on.

“It’s been a really rough 18 months,” Morris said in an interview.

She expressed pride in her team but said they are exhausted after facing the deadly, complicated disease for over a year, and told the Liberal leader she’s concerned about young people being put off joining the profession.

In between selfies, the Liberal leader asked the nurses and doctors about their experiences treating increasingly younger, unvaccinated virus patients during the fourth wave.

Nurse Arthur Williams said he’s worried about the staffing shortage nurses face — a theme repeated by several of his colleagues during their short chats with Trudeau.

Though he acknowledged that health-care issues like staffing and wages — which typically fall under provincial jurisdiction — are tricky for federal leaders to navigate, Williams said the visit from Trudeau was meaningful.

“It feels good,” Williams said. “He’s aware of some of our issues.”

Emergency physician Lucas Chartier said he respects that Trudeau has tread into healthcare policy “at the right time for the right reasons” during the pandemic so far.

He said he’s hoping to see more clarity from leadership on tough policies like vaccine passports and certificates as increasingly exhausted health workers face down a fourth wave of infections.

“After the anxiety of the first one, the burden of the second one, the burnout of the third one, I think we’ve come full circle and we’re going back to the anxiety, except the health-care workers have a lot less empathy and a lot less mental and emotional reserves to face it,” Chartier said.

“We need some … decisive actions by the governments and our leaders to be able to make the right calls, the unpopular calls that are coming.

In his meeting with the hospital staff, Trudeau strove to set himself apart from his main rival, Tory Erin O’Toole, who has come out in favour of less strict mandatory vaccination policies for workers and access to non-essential public spaces.

But Trudeau has faced a barrage of criticism from his political opponents for triggering an election as the pandemic’s fourth wave gathers steam across the country and drives spikes in daily case counts and hospital admissions.

New modelling from the Public Health Agency of Canada released on Friday further fueled some of those criticisms. The figures suggest Canada could see more than 15,000 new cases a day by October under current transmission rates, with the ramp up running through the Sept. 20 election day.

Also on Sunday, Trudeau pledged tighter controls on guns already banned by his government and funding for provinces to prohibit guns locally.

Trudeau targeted O’Toole over a proposed repeal of a Liberal ban on 1,500 firearms — a stance the Tory leader reversed the same day after mounting pressure to clarify his position.

Trudeau highlighted the Liberals’ campaign promise to offer owners of weapons affected by the ban the option of selling them to the government or having them rendered inoperable.

Those include the AR-15 rifle and the Ruger Mini-14, which was used in the deadly Ecole polytechnique massacre of 1989.

2:01
GTA parents on edge as beginning of school approaches

GTA parents on edge as beginning of school approaches

O’Toole has argued that hunters and sport shooters have been unfairly caught up in the Liberal ban.

Another Liberal gun campaign promise, outlined by the leader on Sunday, aims to limit the number of rounds high-capacity gun magazines can hold.

Also on the table is a $1 billion pledge to help provinces and territories ban handguns.

Trudeau noted that legislators in Quebec have already indicated interest in banning handguns, and said his government would be open to helping other provinces do the same.

He didn’t directly answer why his party’s policy on handguns is only optional and not mandatory for provinces to enforce, saying his Liberal government has “step-by-step” increased gun control in the country over six years.

The Liberal leader also commented Sunday on the removal of another Ontario Liberal, Raj Saini, who is facing allegations that he harassed a staff member. The party said Saturday Saini was no longer running as a candidate after new, unspecified information came to light.

Trudeau said Saturday it was a “far from ideal situation” to no longer have a candidate in Saini’s Kitchener, Ont., riding.

“I understand people being angry about it. I’m pretty frustrated about the whole thing myself,” Trudeau said, adding that he’s “driven” in his political roles to stand up for people facing harassment and intimidation.

Trudeau faced criticism on the issue earlier in the day from NDP Leader Jagmeet Singh, who accused Trudeau of doing nothing to address the controversy surrounding Saini.

The Liberal leader’s campaigning day in the Toronto area wrapped up with disapproval of a different sort.

A brisk stop at a Newmarket, Ont., restaurant patio was disrupted by a group of shouting protesters who were angry at pandemic measures.

Some protesters shouted threats, profanities and conspiracy theories about vaccines, swarming the Liberal campaign bus and the patio as Trudeau greeted his supporters.