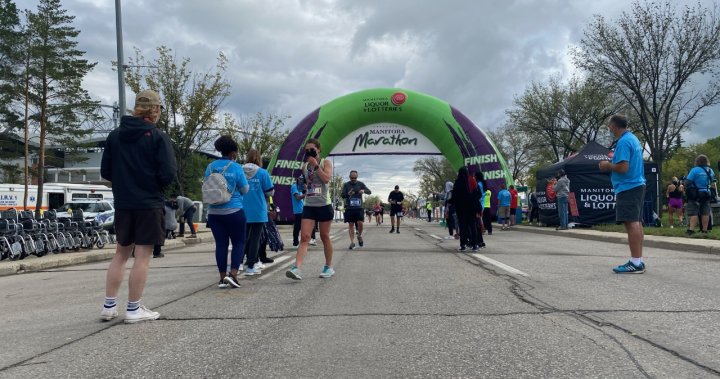 It’s been 812 days since the Manitoba Marathon last occurred in-person at IG Field.

A fraction of runners compared to other years signed up to compete in the modified event due to the COVID-19 pandemic, including first-time marathoners and a man hoping to beat a Guinness World Record for the fastest full marathon while dribbling a basketball — spoiler: he did it.

Hailing from Blumenort, Man., Steffan Reimer, 32, decided he would attempt the record for fun.

“You know, your mind goes crazy when you’re stuck at home, so you come up with crazy ideas,” Reimer said.

It wasn’t all competitive, as many runners were simply happy to be back at the marathon for the first time in over two years.

Anika Campeau finished her first full marathon Sunday after taking up running as a way to get out of the house during Manitoba’s multiple lockdowns.

“I turned to running during the pandemic as my escape,” Campeau said. “I really relied on running as kind of my exercise, but also my therapy.”

“We knew we were going to a virtual one if this one didn’t happen,” Heschen said. “We just went in with really good spirits.”

Positive energy flooded the event as spectators cheered for family and friends while runners crossed the finish line, pumping their fists and grinning from ear-to-ear.

It was those moments executive director Rachel Munday said were her favourite part of the day.

“I think until people actually stood at the start line this morning they didn’t think they’d actually be able to go,” Munday said. “To be able to cross the finish line, there’s been a lot of tears of joy, a lot of emotion and a lot of excitement.”

The event usually hosts roughly 12,000 participants, but Munday said this year was closer to 3,000.

Runners were required to wear masks while waiting in their corral and once they crossed the finish line.

Orange pilons separated athletes into five lanes at the starting line. Once a buzzer would sound, five people would start to run, followed by a five-second pause before the next group of five could begin.

Munday said the delay between runners helped ensure social distancing during what is normally the most crowded portion of the event.

“We usually send them out in five waves over a period of 20 minutes,” the executive director said. “Today, we did groups of 500 over four-and-a-half hours.”

Next year, Munday said she hopes the event will be as close to “normal” as possible, with the marathon scheduled to take place on Father’s Day as it always has in years past.