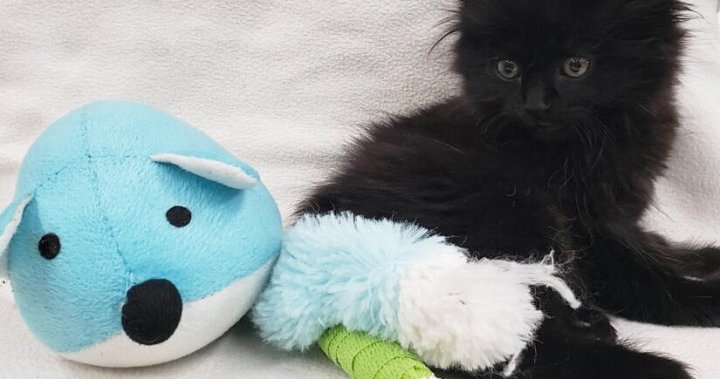 A kitten that was severely injured in June after being thrown from a moving vehicle in Kelowna is now thriving and basking in the glow of some significant community support.

“Ivy is a trooper. When we first met her, she was very traumatized physically. Her injuries meant that she would have a long road to recovery,” Sean Hogan, manager of the BC SPCA in Kelowna, said in a press release.

“But it was her strong personality that stood out and gave the veterinary team and us the confidence that she would pull through.”

Ivy was taken to the Kelowna SPCA in June after being thrown from a moving vehicle.

The impact of the harrowing ordeal left the seven-week-old cat’s tail skin almost completely removed and one of her femurs was fractured and required surgery. After her examination, it was determined that her tail was beyond repair and would need an amputation.

The SPCA went to the community and asked for support to get the kitten on the mend. It was a call the community immediately heeded.

When Petsecure learned about Ivy’s terrible experience, the company offered to match all medical donations up to $3,500 to help cover her medical costs, including surgery, medication and treatment until she’s ready for adoption. Then the donations began to roll in.

Flash forward a few months, and Petsecure and SPCA donors have raised over $44,000 for the kitten’s care.

“Ivy’s recent medical exam showed excellent and continued healing around her hip and femur issues, which might not require surgery after all,” the BCSPCA said in a press release.

“She is expected to make a full recovery.”

Once that happens, she will be ready for adoption.