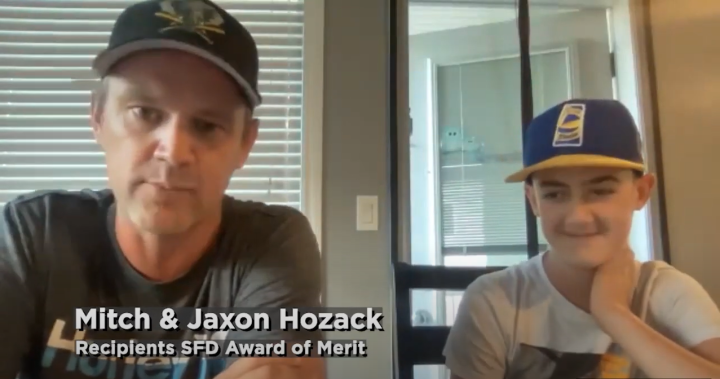 The Saskatoon Fire Department is recognizing a father and his son for their instinctive actions and heroic efforts during a house fire in July.

Mitch and Jaxon Hozack were given the SFD Award of Merit by Fire Chief Morgan Hackl during a virtual meeting on Tuesday.

A press release said Mitch Hozack and his son Jaxon were on their way to Jaxon’s semi-final baseball game on the morning of July 25 when they noticed black smoke coming from between two homes.

Mitch pulled over, realizing the deck was on fire.

“My first thought was there’s no way these people know that (house) is on fire,” Mitch said during the virtual meeting.

He told Jaxon to call 9-1-1 as he jumped out of the vehicle and began banging on the doors to get the attention of the residents inside.

As he continued trying to alert the residents, the fire spread and both homes caught on fire.

The fire department said Mitch eventually caught the attention of the occupants and was able to warn them about the fire. Everyone was safely evacuated from the home.

The report of the 33rd Street West bungalow fire came in at 8:13 a.m. that morning. Fire crews arrived on the scene and found the bungalow fully engulfed in flames and the fire potentially spreading to homes on either side.

“Thanks to the help of Mitch and Jaxon, all residents were found and accounted for and fire crews were able to focus their efforts on extinguishing the fire,” the press release stated.

The fire was brought under control by firefighters by 9:38 a.m. Damage to all structures was estimated to be $325,000.

“We are thankful that Mitch and Jaxon were willing to spontaneously put their morning plans aside for the safety of others,” says Fire Chief Hackl.

“Helping others, even those we have no connection to, is a value at the heart of the culture in Saskatoon. We recognize Mitch and Jaxon for putting this value into action.”

Mitch and Jaxon went on their way to the baseball game once the fire crews arrived and everyone was out safely.

“After the game, he came up and said ‘that one hurt dad, that one really hurt’, and gave me a hug and then he said, ‘but we have a house to go home to,’” Mitch recalled.

The Award of Merit presentation is available to watch on YouTube.