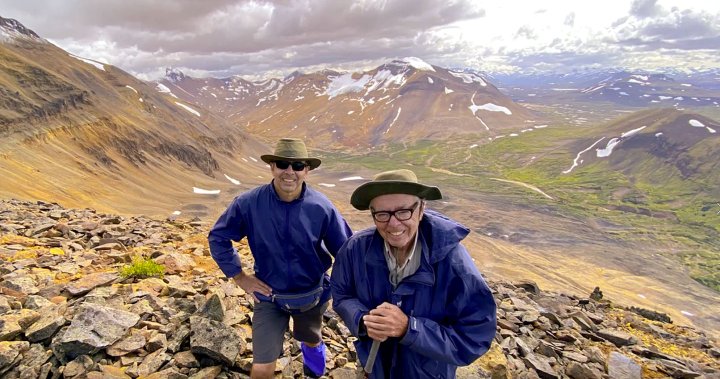 Last month, the roles were reversed, with a Lower Mainland man in his 50s taking his 78-year-old father who lives in West Kelowna on a long and memorable hike in northwestern B.C.

Clayton Cunningham of North Vancouver says he’s taken many memorable hikes with his dad, Don, but nothing quite as rugged, remote or spectacular as their trip to Mount Edziza Provincial Park.

According to BC Parks, Mount Edziza is a composite, four-million-year-old volcano and reaches 2,787 metres high. The park encompasses 230,000 hectares, features five significant lakes and is located close to the Alaskan panhandle.

The Cunninghams say they’ve hiked Mount Robson, Mount Assiniboine, did the Bowron Lakes chain and ascended Kilimanjaro, along with many camping, fishing and backcountry ski weekends.

Don Cunningham is a former teacher, but also adores the outdoors, along with being a firefighter in his youth.

So, of the many parks and mountains to hike in B.C., why that one?

Don said he learned about Mount Edziza years ago via a TV documentary, which he recorded. He kept the tape and showed it to Clayton, who, according to Don, thought it would be a great trip one day.

“I thought that would be the end of it,” said Don. “And then last year, he said, ‘Dad, how would you like to do Mount Edziza?’”

Don said prior to the trip, he did plenty of training by hiking Bear Creek Park in West Kelowna with a pack weighing between 30 and 50 pounds.

“I’d go around two or three times, and I did that three times a week,” said Don. “I thought I was fully ready for Edziza,” he said.

“But it turned out that Edziza was more of a challenge than I thought it was going to be.”

Clayton said they researched everything, including picking a floatplane company to charter them to Mount Edziza.

4:21
Safety tips for your outdoor adventures

Normally, most people imagine northern B.C. brimming with forests. But not so with Mount Edziza.

In fact, the Cunninghams said the only vegetation they saw — shrubs and virtually no trees — came up to their knees, as they were above the tree-line the entire time.

And then there were the mountains — brown, orange and yellow in colour.

“If you like wilderness areas, it’s truly beautiful,” said Don, adding they saw around 16 bears on the four-hour trip from the Highway 16 turnoff east of Terrace to Tatogga Lake Resort on Highway 37.

Before landing, Don had read that there were no trails.

“And I thought for sure there would be some kind of a trail,” he said. “But there were no trails.

“We had to go strictly on GPS points. And without those, we would have gone nowhere.”

Don gave credit to whoever marked the GPS points, stating they were thoughtfully done due to the region’s rugged topography.

To get there, it’s a five-hour drive north from Prince George on Highway 16 to the small community of Kitwanga. From Kitwanga, it’s another four hours north to the resort.

All told, the Cunninghams say they drove 17 hours north from West Kelowna to get to Tatogga Lake Resort.

“The driving, which I thought was going to be long, was quite enjoyable,” said Clayton. “We just chatted; we didn’t even have the radio on the entire way up.

“It was a chance to catch up, so it was great.”

Being remote, it doesn’t receive many visitors, with the Cunninghams saying they saw only one other hiking group during their four-day visit in the park.

Further, Clayton said comments from social media posts asked if he was outside the province.

“I’ve already gotten lots of comments that you wouldn’t know that we were in B.C.,” said Clayton. “It’s just a different world.”

As a side note, the Cunninghams say they only saw one other group — from the Lower Mainland — during their time at Edziza.

4:57
AMA Travel: Hiking and other attractions in Utah

Not all provincial parks have marked or easy hiking paths.

And along with a lack of trees at higher elevations, the Cunninghams said when it came to storing food, you had to put it under rocks, keep the odour to a minimum and hope that bears in the area wouldn’t find it.

Clayton said the park is more than 100 kilometres from north to south.

“And these aren’t normal kilometres. There’s no trail,” said Clayton.

“If you look at it in your day planner, 10 km doesn’t seem like much. But you have 50-pound packs and you’re walking over rocks, basically. If you’re lucky, it’s just gravel.

“But it’s uneven ground. Every step is a potential ankle-twister, and you’re constantly going across creeks, trying to find the best way to cross it. You’re backtracking … it’s not fast going.”

Clayton said the rocks ranged from fist-sized to the size of desks.

“On steep terrain, every little step you’d take would basically cause a little avalanche of little rocks,” said Clayton. “And we both fell two or three times because of the terrain and the rocks.

“But the risk (of falling) was always there because you’re carrying a 50-plus pound pack.”

Clayton also noted there were very few places to set up camp because of the rocky terrain and steep slopes.

End of the trip

Clayton said not only was it impracticable to walk side-by-side for many portions because of the terrain, but that he could see his dad tiring.

On the fourth day, Don said he couldn’t go on, and they decided to call via satellite text for air help, at their expense, to pick them up.

The two contacted their charter company and told them they were nowhere near a lake for a floatplane to land. In turn, a helicopter was sent out in just under two hours.

“I sometimes forget he’s 78, and he’s still out here, doing this crazy stuff,” said Clayton, noting his dad was 76 years old when they ascended Kilimanjaro.

“I feel really blessed that way. It’s what we’ve been doing since I was a kid, going outdoors. And he impresses everyone, especially now that he’s getting older, how he’s still doing these things.

He also said Kilimanjaro was “glam camping” compared to Edziza, as, unlike Africa’s tallest mountain, there were no porters and no trail.

With the trip now in the rear-view mirror, Don called the trip fun and memorable, even though he had to end it early.

“It was stunning; the scenery is incredible. It was worth every minute of it.”