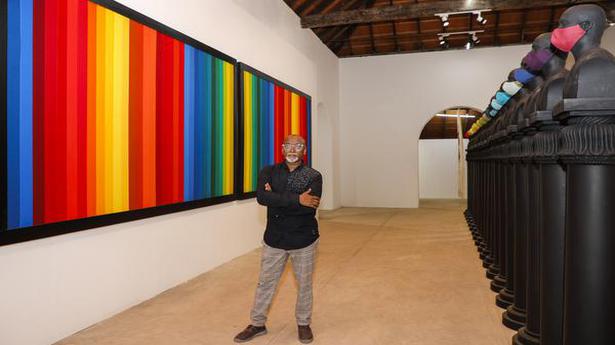 270 artists. 3,000 artworks. 600,000 sq. ft. of display space spread across 3 sq km. And this does not include the 11,000 sq. ft. Durbar Hall in Kochi. If there’s one thing the ongoing Lokame Tharavadu art show in Kerala’s Alappuzha town has in spades, it’s ambition. Matching and possibly surpassing the Kochi Biennale at least in scale, this brainchild of artist Bose Krishnamachari, who is also the president of the Kochi Biennale Foundation (KBF), had a rather unfortunate birth. Like everyone else, Bose underestimated the pandemic and scheduled the show’s opening for April this year, only to be rebuffed rudely by the second wave. Now, the show is back, with extended dates, renewed vigour and sanitiser galore.

Sometime in September 2020, Bose had wanted KBF to cobble together something to support Kerala’s artists — “it was important to give them confidence” — and the Board asked him to pick up the gauntlet. The artist took it on. “Unpredictability is beautiful,” he says. “I was up for it.” Existing travel restrictions initially confined focus to Kerala-resident artists, but soon Bose expanded it into a Malayali-only collection, with artworks shipped in from Paris, Dubai, Delhi, etc. For local artists, Bose scoured the State, from Kasaragod to Thiruvananthapuram, visiting homes and studios over two months. “I found artists who had never shown anywhere,” he says. As the discoveries mounted, the modest idea soon morphed into its present mammoth shape. For almost a year now, the Mumbai-based Bose has been stationed in Alappuzha, in a rented flat run over by artists and volunteers and one chechi feeding them all.

“Come to Shed D,” Bose tells me, when I call from the Kerala State Coir Corporation gate. I trudge over to a cavernous building, crossing grounds overgrown with vegetation, past a broken office chair basking in the sun, and am met by three stunning V.V. Vinu installations, in his signature material, the wood of the odollam or suicide tree.

Transformed into a gigantic gallery space, all white walls and focussed lighting, the innards of the erstwhile coir factory are unrecognisable. The makeover story is repeated across the five Alappuzha venues — two restored factory sheds and one restored port office from the government, and two sheds courtesy Betty Karunakaran, local industrialist. These enormous spaces with their soaring ceilings and endless hallways lend infinite atmosphere, with the locale becoming art in its own right. In the Eastern Produce Company shed, for instance, much of the floor is carpeted with gravel to cover its unevenness, which segues seamlessly into Vipin Dhanurdharan’s installation of a stretch of railway track to memorialise the tragedy of the migrant labourers who were run over by a train last May.

This collocation is not providential — Bose had the nous to plug into the ongoing Alappuzha Heritage Project, under which Kerala’s tourism ministry is restoring and conserving the town’s old buildings and converting many of them into museums. For this enormous undertaking, designed to bring back Alappuzha’s ‘golden era’, the collaboration makes sense. As P.M. Nowshad, managing director of the Muziris project, walks me through the sites, one gets an early glimpse of the immense potential that can be unleashed here. Kerala’s former Minister for Finance and Coir, Thomas Isaac, long known for his patronage of culture, encouraged Bose to come to the canal city, extending logistical and financial support via the tourism department. “The idea is to make Alappuzha a rich heritage town,” Isaac tells me, and “working with this art project is in line with that.”

The government has promised ₹2 crore to the roughly ₹4.5 crore Lokame Tharavadu budget, Bose sold some of his pieces to raise money, sponsors were found for painting, lighting, landscaping works, and various private donors chipped in. Some artists have also volunteered a portion of any sales to KBF. The Lokame Tharavadu office, set up in the Coir Corporation building, is busy, with long worktables, PCs and laptops, unused artworks leaning against walls, and an army of volunteers buzzing around. Visitors have begun to trickle in, and I see Bose giving a talk to 40-odd students from an architecture college. “The Kochi Biennale can be extended here, or a parallel one can be held,” says Bose. “There is space and there is local participation.”

Given that Lokame Tharavadu translates into ‘The world is one family’, there is some discomfort in the hint of parochialism inherent in any collection driven by regional identity, although Bose says the idea was driven more by practical considerations. Also, as art critic Sadanand Menon points out, a numerical aggregation of artists from one linguistic group is conceptually limiting. “A quantity called Malayaliness is seemingly made to triumph over a quality called art. It could be a slippery slope,” he says. However, the negatives of the approach appear offset here by the sheer possibilities that have been unearthed.

In Irinjalakuda, Bose discovered E.N. Santhi in a one-room house, dozens of detailed village drawings stored under her bed. In Ernakulam, Asha Nandan was using her kitchen as studio. Alappuzha yielded G.S. Smitha, whose canvases glow with teeming, fecund life. C.M. Shanta, a self-taught 65-year-old who sold eggs in Kozhikode, has delicate abstracts on the walls. In effect, the project has become an extraordinary art census for the State, both enumerating and platforming artists. A rich diversity of practice is on show — from realism to abstract, surreal and conceptual works, from sculpture and installations to cartoon, tapestry and photographs. While they’re not all uniformly of a high order, the nucleus of talent is unmistakeable.

Alappuzha-based V.S. Blodsow, who did a stint at Cholamandal, has two conceptual works displayed across 23 feet in New Model Society. One, titled Article 19, is a series of 19 fibreglass figures with embroidered masks that spell Constitution of India. Opposite this, and almost twinning it, is a colour spectrum created from blouse pieces, symbolising the history of lower-caste women forced to bare their breasts in 19th-century Kerala. “I imagined these in Chennai, but had no space for execution,” says Blodsow. “The scale this show has offered is vital.”

It has also been a significant experiential opportunity for the community. “Production, curation, how to install, exhibit, frame… it’s been a huge learning curve,” says Blodsow. Equally, opening it up for sales has meant a big deal. It’s a buzz many of the artists have seldom experienced. “Many works have been sold,” says Bose. “And many galleries are already showing interest.” A French curator saw one of the works on Bose’s Insta page and has chosen it for a 2022 show.

Despite its substantial contribution to cinema, theatre and the performing arts, Menon points out that Kerala hasn’t really figured on the country’s visual arts radar. With few display spaces and little patronage for shows and catalogues, most artists have made it big outside. In such a scenario, this exercise in consolidation can become the base for an arts ecosystem. If the energy I sensed is anything to go by, then, to echo Bose, I see residencies, workshops and lectures, I see Alappuzha emerging as an art city in the not so distant future.

ON SHOW: ‘Lokame Tharavadu’, Alappuzha and Ernakulam, till November 30.