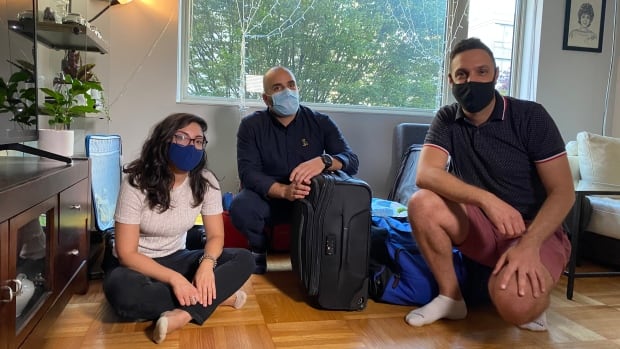 In a sunny apartment in Vancouver’s West End, three friends systematically pack six suitcases with what looks like the contents of a drug store.

Dozens of bottles of aspirin, acetaminophen, ibuprofen and other over-the-counter medications, stacks of medical masks, boxes of powdered milk, diapers and boxes of sanitary napkins are packed and documented, with items moved around like a high-stakes game of Tetris.

Charbel Elia, Patrick Rmeily and Julnar Doueik will be taking the suitcases to Beirut later in the week, where they’ll be donated to grassroots organizations.

Luggage brimming with medication has become a common sight in the living rooms and kitchens of Lebanese living around the world as people pack what they can for friends and relatives in their home country, which is in the grip of an economic crisis.

Elia said it was a message from a friend in Lebanon, a mother with two children, that prompted him to get involved.

For over a year, Lebanon has been living through economic disaster. Its currency, the Lebanese pound, is devaluing at an alarming rate, making local salaries nearly worthless. Hyperinflation, widespread shortages, political gridlock, rampant corruption and the explosion that ripped through Beirut in August 2020 have only plunged the country further into despair.

Lebanese living abroad have fielded messages from family and friends asking for basic items. Some commercial airlines have increased the baggage allowance for flights into Lebanon, recognizing that people are bringing crucial supplies to family members.

“There’s a catastrophe going on in Lebanon,” said Rmeily, whose Vancouver apartment has looked like a makeshift pharmacy for weeks as the friends collected the cargo.

“People were no longer able to get medication because we import everything in U.S. dollars and everything is being dealt with in the Lebanese pound, so the buying capacity is down … They can’t buy anything anymore — it’s out of stock or it’s not in the market.”

The contents of the suitcases are valued at around $4,000, raised through donations from friends and co-workers since the one-year anniversary of the Beirut blast.

Since a 15-year civil war ended in 1990, droves of Lebanese have left the country, fleeing waves of crisis and seeking opportunity elsewhere. There are around 14 million Lebanese living abroad compared to around five million in the country itself — and now, they are organizing.

Doueik is a member of the United Diaspora, a network of Lebanese in 35 cities around the world, with Canadian branches in Ottawa, Montreal, Toronto and Vancouver.

The group works to create change in Lebanon from abroad, and is now focused on registering Lebanese outside of the country to vote in upcoming elections.

“We were forced to be expats and we have a duty to actually do whatever we can to support the people back home, and maybe one day return and live there with dignity and respect,” said Doueik.

The three friends now face a long flight to Beirut, worried all the while that airport security will deem the bags suspicious, or that Lebanese authorities will confiscate them upon arrival. Still, they said, they have to try.

“Hopefully, every time a Lebanese goes and fills a suitcase or two, it could make a huge difference in a few families’ lives. I know that this is only going to be such a small thing, but it makes you wish like you could do it for everyone,” said Rmeily.

But there are other supplies that can’t be shipped through a checked bag, like prescription medication and cancer treatments. Lebanon is also facing fuel and electricity shortages, and United Diaspora is working to ship solar panels to help keep the lights on.

“People say ‘You live abroad, you should feel better about your situation.’ No — my family lives in Lebanon, I have my mom and dad there, my sister, my nephews,” said Elia.

“I’m so anxious to see it and see the new version of Lebanon that I don’t know yet.”