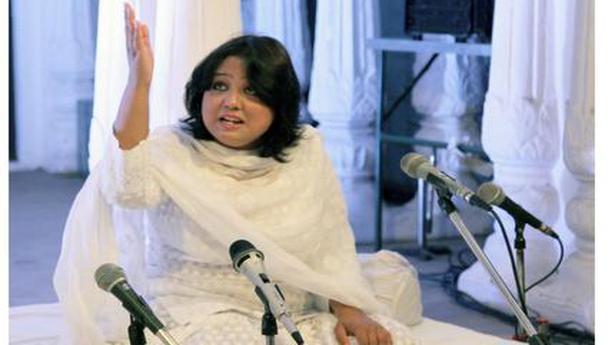 Tales of adventure, heroism and love unfold through the lyrical grace of Urdu poetry in the timeless storytelling tradition of Dastangoi. The storyteller, known as the Dastango, keeps the audience immersed in the narrative, using voice and gestures, sans sets or props. Like many other performance traditions, this too has historically been performed by men, but is gradually finding new voices with emerging women performers. Fouzia Dastango, a pioneering woman performer, is pushing the horizons of Dastangoi, one story at a time.

Recalling one of her earliest presentations in 2007, Fouzia says, “Someone from the audience remarked that this art form isn’t for women. This is something I have been told many times, and my response is — there are many things women may not have done earlier, there are many spaces where they weren’t allowed, that does not mean women cannot do it. We need to question this attitude.” Unfazed by the scepticism, Fouzia decided to pursue all nuances of the art form.

Dating back to the 13th century Persian and Mughal courts, Dastangoi flourished in the northern parts of India in the 16th century. Epic tales from literary classics like Tilism-e-Hoshruba and Dastan-e-Amir Humza have been the mainstay of the oral tradition. The art form faded with the death of the legendary Dastango, Mir Baqar Ali, in 1928. Revived at the turn of the 21st century, the tradition is now alive to possibilities of absorbing contemporary themes and innovative formats.

“The biggest challenge of being a woman Dastango is that there is no point of reference for us,” says Fouzia. “While there are images, historical records and elaborate descriptions of male ustads, I had no one to emulate or turn to.” Delving into lived experiences of women that do not find mention in historical accounts, she turned to the bylanes of Old Delhi, where she grew up, to equip herself in the art.

Though women never ventured into public places as professional storytellers, the domestic space was alive with their vibrant parables and epic tales. “My grandmothers and other elderly women had a khazana (treasure) of stories for all occasions. They would tell us these tales, transfixing us with their voice modulations, enactments and graceful gestures. That has been my true training, even though I didn’t realise it for a long time.”

While in school and college, Fouzia was often asked to narrate stories, which helped her discover her flair for storytelling. “Mastery of the Urdu language is important and I worked hard on that. But what is more important is the ability to find your voice and allow your personality to reflect in the narration. I learnt this from my grandmothers, who said, ‘dastaan ko apne andaaz mein kehna hai’ (the story should be narrated in your own style).”

Fouzia with Fazal Rashid performing at Jashn-e-Urdu Festival, in Bhopal, in 2019

The journey of finding her own andaaz wasn’t easy. She had to make her stage presence felt without giving in to the frames of reference that male performers had set. “Working on the voice was crucial. Men have a certain kind of voice projection; if I had tried to use the same technique it might have sounded shrill. Through trial and error and riyaaz, I had to find a style comfortable for me — with all the feminine nazakat (grace),” says Fouzia, who has in the process revived the Begamaati Zabaan or women’s language. “It is my tribute to the grand ladies of Old Delhi. This language emerged from the zenana (the part of the house occupied only by women) culture of those times.”

Incidentally, she began performing in similar spaces, which became her training ground. “It has not been easy to get the big stages and auditoriums as a woman Dastango, unless I was part of some major literary or performance festival. So I started performing in homes before an audience of 10-12 people.”

While she still had a full-time job as a lecturer with SCERT and a household to support, she knew that being a storyteller was a part of her identity. In 2009, she decided to add ‘Dastango’ to her name.

Fouzia recalls one of her early performances with seasoned Dastango artiste Danish Hussain. “I was performing with a true master of the form and I was really nervous about how the audience would respond.”

The script is the key to an engaging Dastangoi performance that may last up to 40 minutes or more. Fouzia frequently collaborates with members of her group, ‘Dastango – The Storyteller’, that includes two women, Saneya and Diba Ghazal, apart from three male artistes, Firoz Khan, Fazal Rashid and Lokesh Bhardwaj. Danish Iqbal has consistently been the scriptwriter and director for most of her performances. “Danish (Iqbal) and I also have several arguments before arriving at the content. We research and read, discuss which points to emphasise.” After about 7-8 drafts written by Iqbal, they finalise the script. Fouzia feels the most important part of the rehearsal is to imbibe the text. “I keep reading the text aloud till the body, mind and language are aligned. The next stage is to work on the emotions where Danish as the director helps me to bring out the beauty of the poetry.” A new performance takes about 4-5 months of writing and preparation before it is presented to the audience.

Over the years, Fouzia and Iqbal have explored new themes and perspectives, ranging from feminist and queer tales to stories of iconoclast authors like Ismat Chughtai and contemporary writers like Namita Gokhale, Malashri Lal and Samina Nazir. The Urdu adaptations of stories from the Mahabharata and historical narratives such as stories from the life of Gandhi have also found their way into her work. Says Fouzia, “Dastangoi goes beyond religious and gender identities. And as modern Dastangos, we need to keep pushing the boundaries.”

The author is a Delhi based arts researcher and writer.