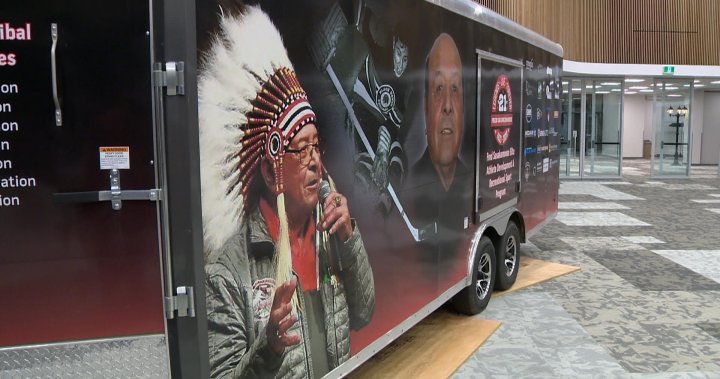 A truck and trailer program dedicated to Indigenous NHL legend Frederick “Fred” Sasakamoose was unveiled this week in Saskatchewan.

As one of the first Indigenous NHLers, he helped break the barrier for generations of First Nations players with the Chicago Blackhawks during the 1953-54 season. He then returned to Saskatchewan to build and develop minor hockey as well as other sports.

Sasakamoose passed away in November 2020 at the age of 86 following a battle with COVID-19.

“Fred Sasakamoose is a legend in our province,” Troy Davies, who is director of public affairs at Medavie Health Services West.

“And not only because of what he did as an NHL hockey player, but more as a person and a leader for the First Nation communities and really for our province.”

“It’s got all the physical equipment that you could think of, ellipticals from lacrosse sticks … soccer balls, hockey sticks for summer hockey playing on the grass, whatever it might be. So it’s basically fully equipped from top to bottom,” Davies said.

“We’ve taken our lead through (Saskatoon Tribal Council) Tribal Chief Mark Arcand and his thought is that we have a lot of reactive happening in the city with what we’re seeing with mental health and drugs and what it might be.

“So we want to be proactive. We want to be out there when they’re kids and get some role models out there and let them have some fun.”

In addition, non-profit fundraising group Synergy 8 helped fund a medical bus to provide health and dental services to the seven First Nations communities that make up the STC.

“Everyone thinks it’s lights and sirens and ambulances where we’re really seeing our paramedicine go to more of a community role and being involved in the community and doing paramedicine through that route. So this is new for us as well.”

Arcand called the project a potential “game-changer” for the First Nations.

“We’re taking a service to our First Nations people that don’t have the opportunity to go and get that service … It’s going to be a fantastic opportunity to build some relationships and keep moving in a positive direction,” he said.

“They get that service right at their door if they want. Pulls right up to their house, in the schools, then we have the mental health and the addictions piece that’s really going to make a difference to work with all of our young children.

“As an elderly person, they can just walk in the bus, five steps from their door and they’ll get a service that they’d have to travel an hour to the major city, an hour and a half to get a service. So this is a game-changer in First Nations communities.”

“Once I heard about and learnt about what their ideas were, I figured it’s a great cause. You get to help out a lot of First Nations people and the community,” said Bear, who is from Ochapowace Nation.

“It’s going to be huge. I mean, it could give some health care, some dental care and some mental health advice to people in need at times like these and COVID when a lot of people don’t get to see many others and get to travel and get out there.

“It’s easy to isolate yourself and get in your own head. So I think it’ll be very helpful for a lot of young kids and older people as well.”

The cost of the entire project was roughly $3.5 million.

“The bus starts Sept. 20 and we’ll go throughout the whole year. That’s with our dentist team, our mental health team and paramedic. And then starting basically June 1, this truck and trailer will go all summer,” Davies said.

“Our goal is to have this bus and the truck and trailer go across Saskatchewan so we just don’t want it in these communities. We want this province-wide and even Canada-wide. So we’re going to have to prove our business case.”