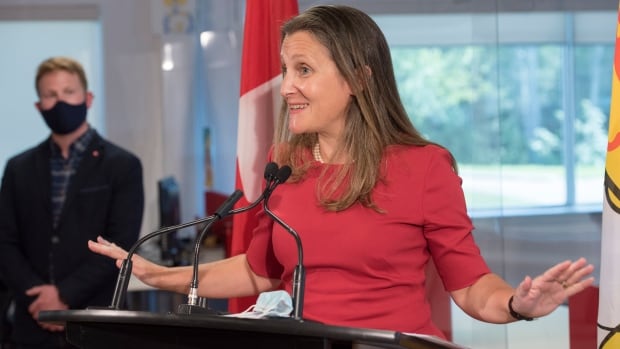 CBC News obtained a letter on Wednesday evening signed by Mylènene Girou, senior director, enforcement at the office of the Commissioner of Canada Elections, sent via email to Freeland, who served as deputy prime minister in Justin Trudeau’s government.

“Our Office has carefully reviewed the Twitter post and video in question and we are of the view that no offence has been committed under the [Canada Elections] Act,” the letter says in closing. “As a result, our file is now closed.”

The tweets in question posted by Freeland on Aug. 22 in English and French contained edited video footage of O’Toole quickly responding “yes” to a question about whether he would bring private, “for-profit” health care to Canada.

The tweeted clip did not include O’Toole’s full answer in the original recording, in which the Conservative leader noted that universal access remains paramount.

Twitter caused a stir in the federal election campaign when it suddenly slapped a warning label on the tweets The Conservative Party filed a complaint to Commissioner of Canada Elections Yves Cote asking his office to investigate whether the tweets violated the Elections Act.

The Conservatives also accused the Liberals of spreading misinformation and resorting to “American-style divisive politics” with Freeland’s tweets.

The Commissioner of Canada Elections is the independent officer responsible for ensuring compliance with and enforcement of the Elections Act and the Referendum Act.