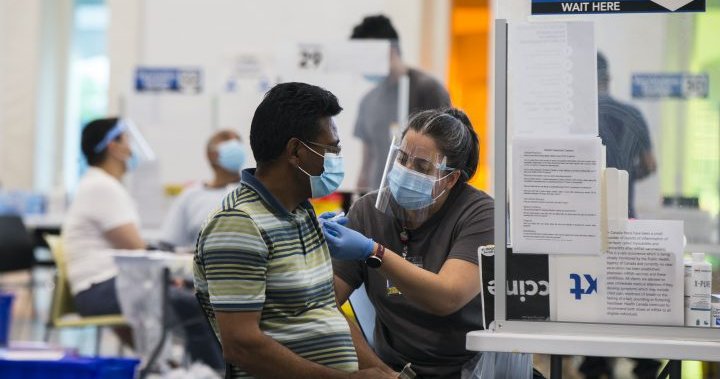 According to a slide deck released by the advisory table, Ontario is now at the beginning of the fourth wave.

“Vaccination offers substantial protection against severe health outcomes. We do not expect to see the same proportion of severely ill cases in the vaccinated,” the slide deck reads.

“Among the unvaccinated, we do expect to see a rapid increase in the number of seriously ill people needing hospital care as workplaces and education re-open in September.”

The advisory table said the fourth wave will affect all age groups and has the potential to “exceed ICU capacity.”

Due to the more contagious Delta variant and in order to avoid another lockdown, the number of people aged 12-plus in Ontario who are fully vaccinated needs to “accelerate substantially” to more than 85 per cent.

Contacts need to be reduced to about 70 per cent of pre-pandemic levels until vaccination rates reach a level where the population is protected, the group said.

The latest provincial figures show that in Ontario, just over 83 per cent of people aged 12-plus have received at least one COVID-19 vaccine dose and 76.4 per cent are fully vaccinated.

A provincial government official noted that Ontario has never experienced a worst-case scenario modelled out by the Science Advisory Table due to the province’s “cautious approach” to fighting the pandemic.

The modelling also shows that the number of COVID-19 ICU patients could exceed that of the third wave — well above 800 — by October in a worst-case scenario. In a lower-range scenario, the number of patients in intensive care would hold around 200.

The modelling also shows that so far, the province is doing better than some jurisdictions around the world in terms of COVID-19 case rates. The province also has lower hospitalization rates when compared to Alberta and British Columbia, but is slightly higher than Quebec.

“Thanks to the efforts of Ontarians, we are confident that Ontario is currently trending between the projected medium and best-case scenario,” said Alexandra Hilkene, a spokesperson for Health Minister Christine Elliott.

“Today’s announcement on the implementation of a proof of immunization policy in high-risk settings promises to further improve the trajectory of COVID-19 in Ontario and protect the province’s hospital capacity as we head into the fall.”

Hilkene said that the months ahead will still require “continued vigilance” and added that the province will continue to seek advice from the chief medical officer and his team.

2/4 New modelling. Vacc is v effective @ individual level. But as we accelerate our vaccine rollout, we also need to take other measures beyond vaccine to stop Delta. Espy keeping contacts between people < 70% pre-pandemic levels. https://t.co/4n3dKjZXTw #COVID19ON