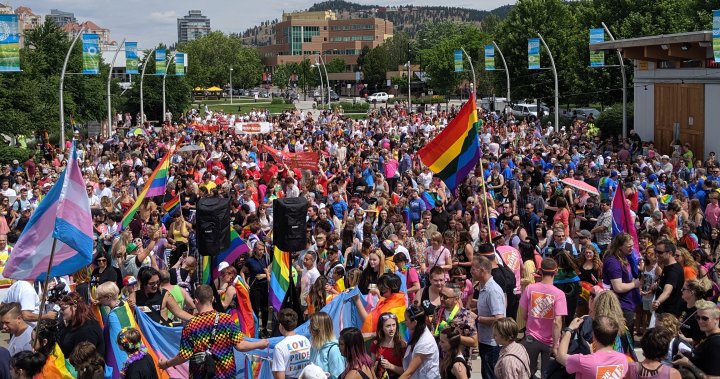 Kelowna’s Pride celebrations are being delayed as COVID-19 concerns and related provincial health orders have made it too difficult to hold the event at the end of September.

The Kelowna Pride Society has announced that Pride Week 2021 will take place Oct. 22-30, with the festival and march scheduled for the last day of the week-long celebration.

“We were all excited for a September celebration, but as the dates drew nearer, we realized we had to pivot, yet again,” said Dustyn Baulkham, general manager of the Kelowna Pride Society, in a press release.

2:13
RCMP and Pride Society working together on program

RCMP and Pride Society working together on program – Apr 16, 2021

“On behalf of the Kelowna Pride Society board, I would like to thank the community for their patience and support. We’re hopeful that the end of October will be a great time for Pride — Pride on Halloween weekend will be a blast — and we hope those who feel comfortable doing so will join us to celebrate Kelowna Pride 2021.”

The last Pride celebrations before the outbreak of the COVID-19 pandemic were the biggest in Kelowna’s history.

More than 12,000 people attended the festival and march in downtown Kelowna in the summer of 2019.

Those numbers aren’t expected this year, organizers hope 2021’s edition can be more of a return to normal following 2020’s scaled-back celebrations, though organizers say there still may be some live-streamed events for those who prefer to not venture out.

Pride week hasn’t always been so well embraced in Kelowna. In 1997, then-mayor Walter Gray refused to proclaim Gay and Lesbian Pride Day as requested by the Okanagan Rainbow Coalition, and instead dropped the pride and proclaimed it Gay and Lesbian Day.

The matter was the subject of a human rights tribunal that found the former mayor discriminated on the basis of sexual orientation, contrary to the B.C. Human Rights Code.

The city then put an end to all proclamations until Mayor Sharon Shepherd was elected in 2005 and they once again became the norm. It was 2011 when the Pride flag was hoisted for pride week at Kelowna City Hall.

The society is looking for volunteers, sponsors, talent, vendors and affiliate event organizers. The theme of Pride Week 2021 is “25 Years of the Pride Movement — The Work is Not Done.” It’s a nod to Kelowna Pride’s beginnings.

Find out more about the Kelowna Pride 2021 (including how to volunteer and more) via kelownapride.com.