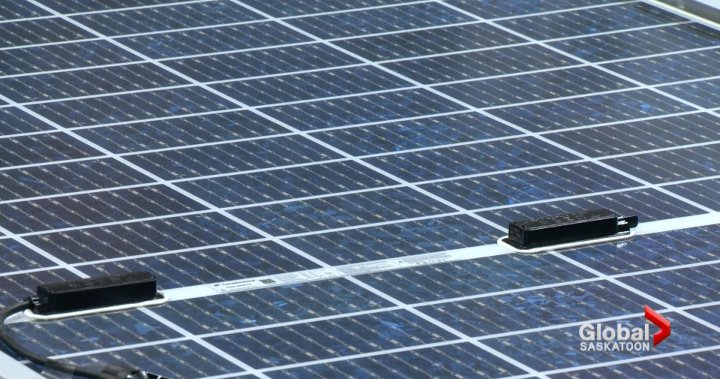 A program has been officially launched by the City of Saskatoon to make it easier for people to afford renewable energy systems on detached houses.

Kevin Bergeron and the team at miEngery are hoping to get as many solar panels off of the wall and onto Saskatoon roofs.

The city said a program like this is needed as more than half of Saskatoon’s single-family homes were built before 1980.

“Which means that our housing stock has a great deal of highly inefficient older buildings that can be quite costly to operate,” the city’s sustainability director Jeanna South said.

Low-flow bathroom fixtures are some of the upgrades homeowners can make.

Expenses are paid through property taxes, giving people without capital a chance to make these changes while decreasing their energy bills.

“And those are all bigger ticket items, so most people don’t have that money sitting there available, and being able to do it through the tax program is quite helpful,” said Jason Yochim, CEO of the Saskatoon & Region Home Builders’ Association.

The city said the interest rate reaches as high as 3.14 per cent depending on the length of the term.

For contractors like miEngery, it hopes this will bring back the demand for solar systems in the Bridge City following changes to SaskPower’s net metering program.

“Definitely that will continue to grow and, like I said, allow some of the smaller competitors to get back in the game — the ones that are still fortunate to be around to continue to grow their customer base as well,” Bergeron said.

The program has a pot of $2.5 million and the city estimates it will be able to help around 100 households.

HELP will be reviewed by city council to see if it will be continued or expanded after two years.