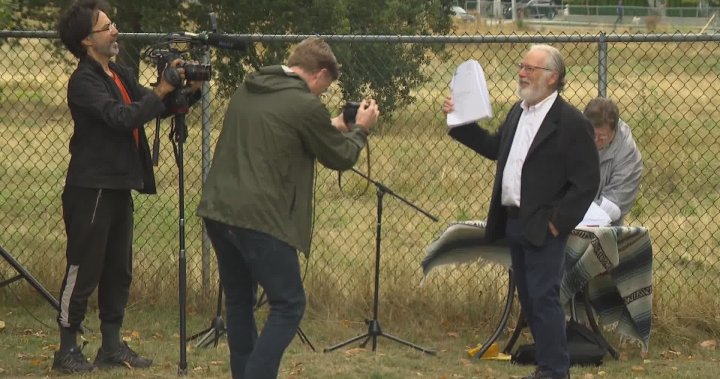 A former British Columbia MLA is calling for a public inquiry after the terms of a 2008 deal between the provincial government and a real estate developer for the Little Mountain housing site were finally made public.

4:33
Rally to take back Little Mountain

Holborn had pledged to build 1,400 market units and 234 units for social housing but the site has been largely vacant for more than a decade.

The price tag for the land was $334 million, but the B.C. Liberal government of the time gave the developer a $211-million loan, which remains interest-free until the end of 2026.

The deal also did not include any construction deadlines.

“No deadlines for building, no requirements to build,” he said Monday. “This is a sweetheart deal.

“No wonder Holborn fought so hard to prevent it from being made public.”

Fifty-three affordable housing units were completed in 2015 in exchange for another five years of that interest-free loan.

The contract states that the 1,400 market condos can only be built after completing all 234 affordable housing units.

No deadlines and a giant interest-free loan may seem strange today, but Tom Davidoff of the University of British Columbia’s Sauder School of Business says things may have been different in 2008.

“Linking the public units to the private units, in terms of the timing of completion, probably would have been enough many times, but in our particular economic environment, it wasn’t,” he said.

“So how much should we blame [former housing minister] Rich Coleman and whoever else signed the contract versus they wrote a decent contract and got unlucky? I think that’s a bit of a judgment call.”

In 2009, about 700 longtime residents were evicted from the properties and told they could be back in new affordable housing just after the 2010 Olympic Winter Games.

Former residents are calling on the current government to renegotiate, take back the land, and use all of it for affordable housing.

“All we need is affordable housing, OK?” former resident Ingrid Steenhuisen said. “Use linoleum instead of expensive hardwood, you know what I mean?”