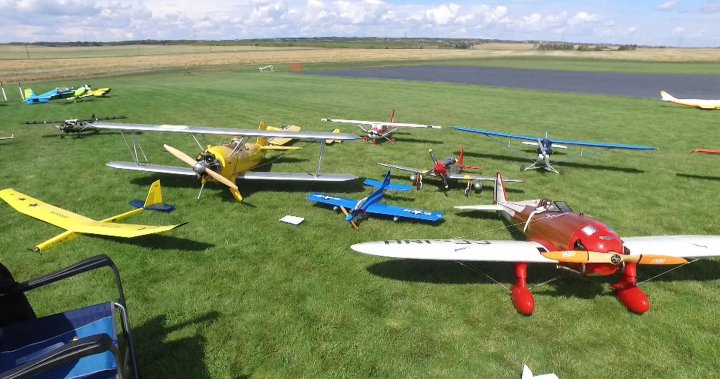 Model aircraft ascended from the Hub City Radio Control Club airfield over the weekend for the 2021 Model Airshow.

The club has been around for 50 years, while the airfield has been at its current location just west of Saskatoon off Highway 5 since 2015.

Rick Reid, the airshow’s chairperson, said there isn’t another facility like this in the province and hope to turn the airshow into an annual event.

“We are hoping to make this an annual event, showcase new planes every year,” Reid said. “Keep people really happy coming out to support our flying club.”

The showcase over the weekend showcased eye-popping manoeuvres from pilots as they worked their remotes with precision commands.

“We’ve got over 100 planes with 50 pilots; only two of them aren’t from the area,” Reid said. “Everything from helicopters and warplanes to electric and gas-powered.

“The show is intended to wow the audience.”

Read more:
Airshow London takes off with another ‘Sky Drive’ this weekend

John Barnsley, a local pilot of over four decades, said it’s more difficult operating model planes compared to the real thing for a couple of reasons.

“It’s because you, the pilot, are not in it,” Barnsley told Global News. “When the airplane comes towards you right is right and left is left but when it comes towards you it’s all reversed, you have to think on your toes and backward.”

Barnsley added there are many types of model planes that a life-sized model never gets to fly, but at the airshow, they can fly any plane within minutes of each other if they choose to.

Many of the model planes operators have aspirations to be pilots, while many life-sized plane pilots take part in flying the model aircraft as a favourite pastime hobby.

Reid said one has to go through a training course before being able to control a model aircraft, something that is offered to the club through the summer.

“People bring out their planes to our club,” Reid said. “We test fly it for them, we get it ready for them. They join the club and we have organized training on Wednesdays taught by professionals.”

Barnsley said some people learn the ins and outs in a week, others in a month, saying everyone learns at their own pace.

When asked why the fascination for flying for the wide range of ages of pilots, Barnsley said it’s the love of aviation.

Reid said they are currently fundraising for a new airfield landing strip for the aircraft.

2:33
Plane passenger shares a different vantage point of BC Wildfire