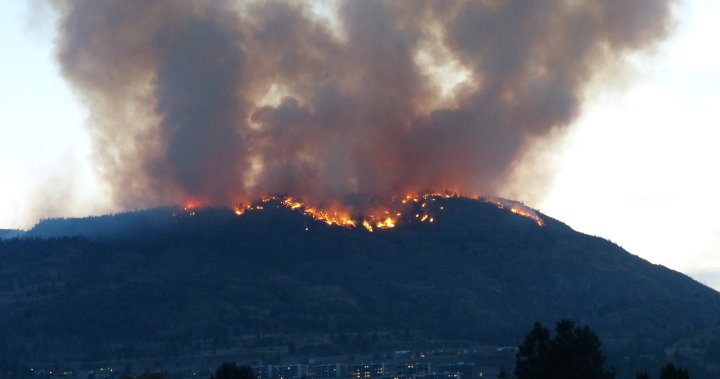 The Skaha Creek wildfire, burning southwest of Penticton, B.C., crested the ridge and crept down the mountainside on Sunday night, threatening a luxury hillside residential development.

The wildfire, first discovered on Aug. 28, was described by locals as looking like a volcano had erupted as bright orange flames illuminated the night sky.

Plumes of smoke could be seen billowing from large swaths of the mountainside above Penticton Regional Airport (YYF) on Monday morning.

The blaze is now highly visible from the entire City of Penticton, Highway 97 and surrounding communities.

No evacuation alerts or orders have been issued, though some residents living in the Skaha Hills development directly below the wildfire are packing up and preparing to leave if conditions deteriorate.

The Skaha Creek wildfire is being managed as part of the Okanagan complex, lead by an incident management team.

Fire information officer Roslyn Johnson said crews will focus their efforts on the east flank of the fire, which is closest to homes, with direct attack operations to contain all spot fires across Skaha Creek Road.

“Heavy equipment will work to build an indirect line on the west and north flanks,” Johnson said.

The out of control Skaha Creek Wildfire in #Penticton explodes to 73 hectares. Here’s the southwest view Sunday night from near Highway 97. @GlobalBC @CKNW pic.twitter.com/CsPo2ktyYQ

“There are two heavy and two medium helicopters working the fire today. Skimmers and air tankers will continue to support the incident, if necessary.”

“The skimmers were providing cooling action and air tankers were putting down lines of retardant,” Johnson said.

UPDATE: The Skaha Creek wildfire is now mapped at 100 ha in size. Structures remain unaffected at this time. Flames may be visible to #Penticton, #BCHwy97 and surrounding communities. Fire activity is expected to reduce over the course of the night.

The City of Penticton issued a statement on Sunday warning that firefighting response efforts may impact operations at the nearby Penticton airport.

Passengers are advised to check yyf.penticton.ca for current flight information.

Recreational boaters on Skaha and Okanagan Lakes are also asked to stay close to shore to allow aircraft responding to the nearby wildfire to collect lake water.

Cooler conditions are lowering the intensity of the fire, with temperatures forecasted to be in the low 20’s for much of the week, a far cry from the high 30 C and low 40 C that fuelled B.C.’s brutal wildfire season earlier this summer.

Winds could gust to 40 kilometers per hour on Monday evening, according to Environment Canada.

A special air quality statement has been issued for the Okanagan Valley due to wildfire smoke.

As of Sunday, there are 232 active wildfires burning in B.C. Nearly 4,000 properties across the province remain under an evacuation order, and 6,255 properties are on alert.

Nearly 3,000 firefighters are on the front lines, assisted by 443 out-of-province firefighters and 110 helicopters and airplanes.