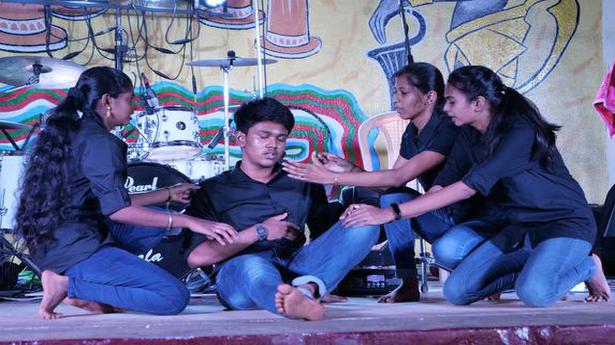 A group of youngsters march out from the audience’s aisle singing, “thananaa thaanana” in high-pitched voices. This team of 11 students from various departments of Madras Christian College (MCC) transformed their personal experiences of the pandemic into a theatrical piece, resulting in the street play Idhu Vaaliba Vayasu. They walk chanting slogans in an attempt to break the fourth wall.

The play highlights everyday problems, touching upon patriarchal notions in the society and emphasising concerns such as substance abuse, unemployment and violence. “We wanted to reflect on the adage, ‘Youth, the future pillars of the nation’.It is also a tribute to the youth who volunteered during this pandemic,” says Rizia Chrislin Bernis, one of the cast and a student of English Literature.

The play directed by David Wesley, assistant professor, Department of English, also touches upon how the youth of this nation have always come to the rescue in times of calamity.. David is one among many who carry forward the legacy of iconic thespian and professor P Rajani who passed away on August 7, 2020. Along with the students, he dedicates the play, which is now available to view on YouTube, to Rajani.

Rajani, a veteran theatre personality, lived his life imparting knowledge to students until his death. He worked in MCC for almost three decades (1968-1998), and went on to work at University of Madras (1998- 2010) for 12 years, where he established the theatre wing, Curtain Call.

Later, he worked in the Central University of Tamil Nadu, Thiruvarur (till 2015) and finally, in a private college in Sulur before his demise. Remembering his teacher, Wesley says, “His life was his work; his work was his life.”

Rajani was passionate about poetry and drama. His incisive reading of literature reflected in his theatre. David says, “Professor Rajani had great trust in the theatrical potential of the written text. He had hawk eyes when it came to lifting drama off the text. Since his entry into theatre was through poetry, he visualised the stage, emotion, mood, and moment in every word of the text.” David adds that he concentrated more on women-centric plays as he saw that theatre was predominantly in the hands of men.

At a time when only British and American plays were performed, he introduced plays from other European countries, South Africa, West Indies, and former colonies like Canada and Australia.

David shares, “The most explicit thing one could notice in him was the passion with which he went about his business. He was a conscientious teacher. As a director, he was equally demanding, not only from the students, but from himself. He would often say, ‘We do theatre not to entertain, but to disturb’. He wanted the performance to stay in the mind of the audience. And so, he worked days together like a man possessed but did not wait a second to receive recognition or accolades. It was always about the text, about the play. It was never about him.”

Fondly referred to as pa by the earlier generation of students and thatha by the later generation, he truly meant it when he looked at you and called you, “child”. The fact that he handed blank cheques to students if he found them struggling to pay their fees, or put a loving hand on the shoulder during times of distress — are testaments to his compassion, adds David.

“All of us, his family and his students, miss him dearly, but what he left behind is throbbing with life and will continue to do so,” concludes David.

The play can be viewed on YouTube at the channel, Media MCC.