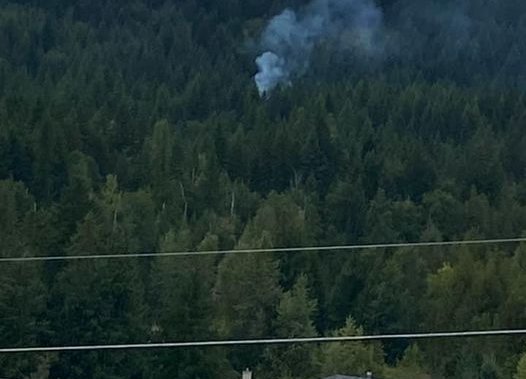 The Lumby fire chief is expressing concern after yet another blaze sparked near a residential area earlier this week.

Thursday’s brush fire was extinguished, but it’s only the latest in a series of suspicious wildfires in the same neighbourhood over the past year.

Around 5 p.m. on Thursday Lumby firefighters and BC wildfire staff were dispatched to a blaze near Cedar Ridge Street.

When Clayton arrived, he found open flames and a small five metre by 10 metre fire burning in the trees on a hillside above the residential area.

He estimates the blaze was about 500 meters from the nearest house.

“We are classifying it as suspicious,” said Clayton.

“There was no lightning in the area. There was no other source of ignition anywhere near it.”

2:13
String of suspicious fires under investigation in Lumby

String of suspicious fires under investigation in Lumby – Jul 15, 2021

His backyard backs onto the forested hillside where the fire was burning.

“It was scary. There is not much we could do. We packed a couple of emergency boxes to throw in the vehicles in case we got warned, but we didn’t get warned,” said DeMarce.

Thursday’s incident is only the latest in a string of blazes that have sparked near Cedar Ridge Street in the last year.

In July, the RCMP announced it was conducting an in-depth investigation into a series of suspicious fires in that area since August 2020.

At that point, the RCMP’s preliminary findings suggested the fires were deliberately set.

“Just be on the lookout. If anybody sees anybody acting suspicious coming down from that area, If you see a fire and someone is coming out of that area, just take note,” said Clayton.

The RCMP confirmed it is investigating Thursday’s fire as suspicious.

However, the police force has to yet determined whether the latest blaze is connected to the other fires in that area.

An RCMP spokesperson said they have not identified anyone responsible for the string of fires.