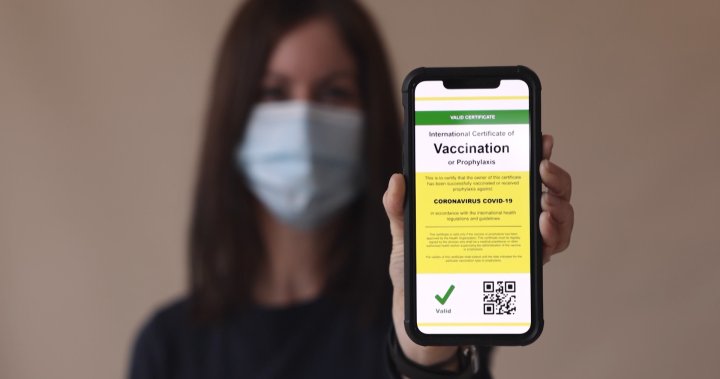 “Vaccine passports” have been a topic of contention and debate among Ontario’s public health and government officials alike over recent months.

Now, sources tell Global News that the province may soon make an announcement regarding a plan.

“I think it’s long overdue — I think the government has been pussyfooting around because they didn’t want to bother some segments of the population,” said Kingston resident John Whyle while shopping at the Market Square Farmers’ Market.

“It’s very logical to have one and as someone who’s been vaccinated, I would like to assure people around me that I am vaccinated,” said resident Ann Douglas.

Sources tell Global News that Premier Doug Ford and his cabinet are debating the implementation of a COVID-19 “vaccine passport” type of certification for Ontario, after months of resisting calls to create such a system.

One source said a final decision hasn’t been made and that there is no consensus yet. They said some cabinet members are opposed to a vaccine passport and some members of the public are also doubtful.

“It doesn’t make sense to me. I think if they really cared about our health they would do something with our health system and our hospitals and such and fix overcrowding versus just spending all this time on making up a passport,” said resident Greg D’Angelo.

Many people Global News spoke with at Market Square felt there would be no downside to a passport and the big winners would be businesses and other people that interact with the public.

“It benefits everybody in that situation — especially workers and such — businesses that didn’t close that we’re going into now and putting them at risk.

“It will make them feel a lot better knowing that everybody around are vaccinated and you’re not only protecting yourself but them as well,” said resident Ava Depagter.

Vaccine certificates have already been announced in Quebec as well as British Columbia. Another source told Global News that if the program is approved, it could be announced as soon as the week of August 30th.