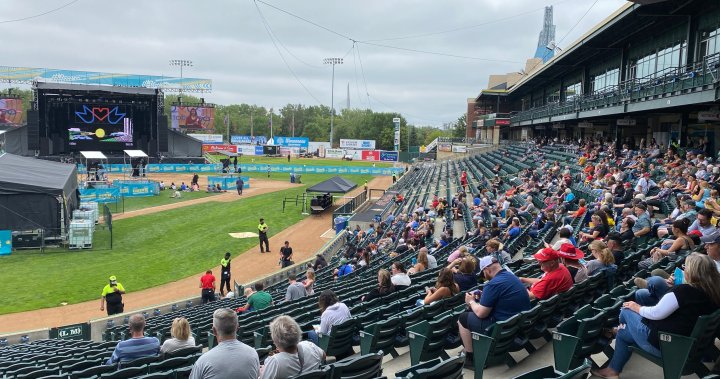 Fourteen months after it was originally scheduled, the Unite 150 concert marked Manitoba’s 150th anniversary since Confederation on Saturday afternoon, after being postponed multiple times due to the pandemic.

The event featured a list of local talent, such as Red Moon Road, Begonia, and Chantal Kreviazuk, with headliners Tom Cochrane and Bachman Cummings set to take the stage in the evening.

“So when we approached them now almost three years ago … they were very gracious and excited to come back to join us and celebrate the province and I think have an opportunity to come back and play for their hometown fans.”

When the gates to Shaw Park opened up at noon, Smith says there were still some tickets remaining for the early show, but the evening sold out to a fully-vaccinated max capacity crowd of about 7,500.

The event was originally set to take place in an open-air setting in front of the Manitoba Legislative Building, but given shifting public health orders, that too was changed to better manage crowds and ensure everyone in attendance could produce proof of vaccination.

The concert was held a year after the official 150th anniversary, and was intended to be the finale to a suite of events happening across the province, but was complicated in many ways by the arrival of COVID-19.