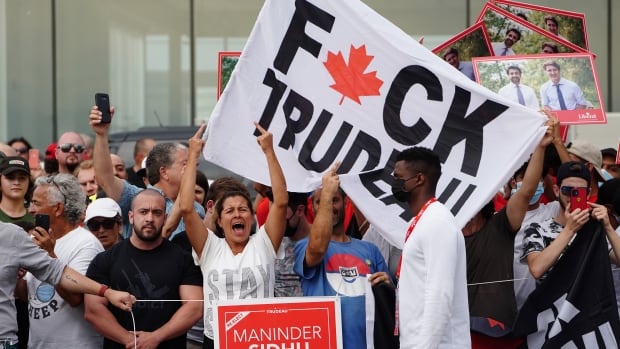 Liberal Leader Justin Trudeau is vowing to meet “anger with compassion” after a campaign rally was cancelled amid protests.

Trudeau was expected to address supporters Friday evening in Bolton, Ont., but the event was cancelled over security concerns.

Dozens of angry protesters, who outnumbered Liberal supporters, gathered near the Bolton rally and began chanting obscenities before Trudeau could make his address.

After a nearly two-hour delay, a man took to the loud speaker to announce that the event was cancelled, to which the crowd reacted with more shouting.

The OPP was called in to escort the campaign bus away from the site. 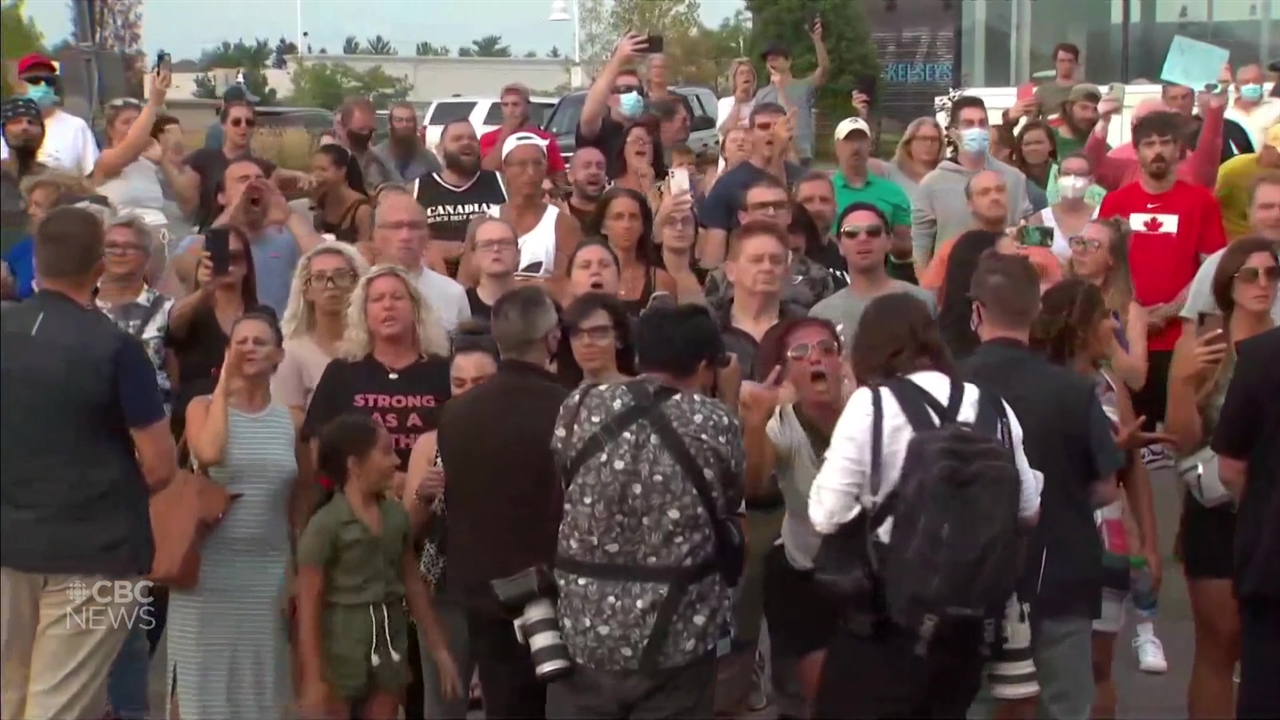 Liberal leader Justin Trudeau was expected to address people in Bolton, Ont. on Friday evening but was cancelled security concerns. 0:35

Trudeau spoke to reporters later Friday evening at a park in nearby Brampton. He said he recognized that the pandemic has been hard on everyone, including those who protested at his event.

“I know we have to work even harder to be there for each other, to support each other. We need to meet that anger with compassion.”

Trudeau said the event was cancelled because they couldn’t ensure people’s safety at the event.

He added that he has never seen this level of anger or intensity on a campaign trail, including his time as a kid when campaigning with his father, former prime minister Pierre Trudeau.

“I think this is something that Canadians, all of us, need to reflect on, because it’s not who we are,” he said.

WATCH: ‘We could not guarantee the safety of the people in attendance,’ Trudeau on cancelling campaign rally 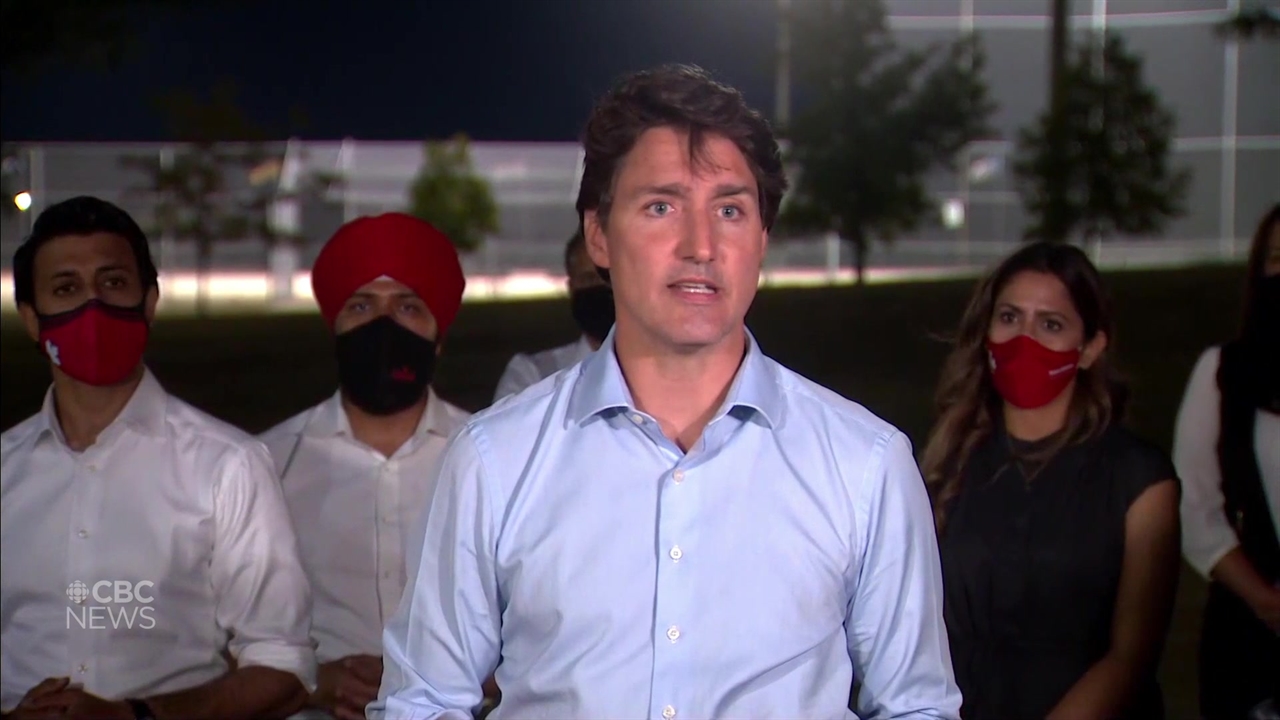 ‘We could not guarantee the safety of the people in attendance,’ Trudeau on cancelling campaign rally

Liberal Leader Justin Trudeau spoke in Brampton, Ont. following the cancellation of a campaign rally planned in nearby city Bolton, Ont., due to safety concerns. 2:05

The rally’s cancellation comes amid heightened tensions on the campaign for both Trudeau and other leaders.

Trudeau was met by anti-vaccine protests in Surrey, B.C., on Wednesday afternoon, some shouting at him that they were refusing to get a COVID-19 vaccine.

NDP Leader Jagmeet Singh had a racist remark directed at him while campaigning on Wednesday in Windsor, Ont.

During Singh’s campaign event in a park, a man shouted “go back home” from a passing vehicle. Singh, who was born in Scarborough, Ont., and raised in Windsor, continued his speech undeterred.

On Friday alone, Trudeau was faced with two crowds of angry protesters.

The Nobleton stop was meant to be a photo-op at a local bakery but was quickly disrupted by the crowd, who appeared to be protesting against pandemic policies.

Before the Liberal campaign bus arrived at the location, the demonstrators had gathered outside, holding signs reading things such as “Trudeau Treason.”

Once the bus pulled up, the crowd starting booing and shouting, which only intensified after the Liberal leader stepped off the bus. 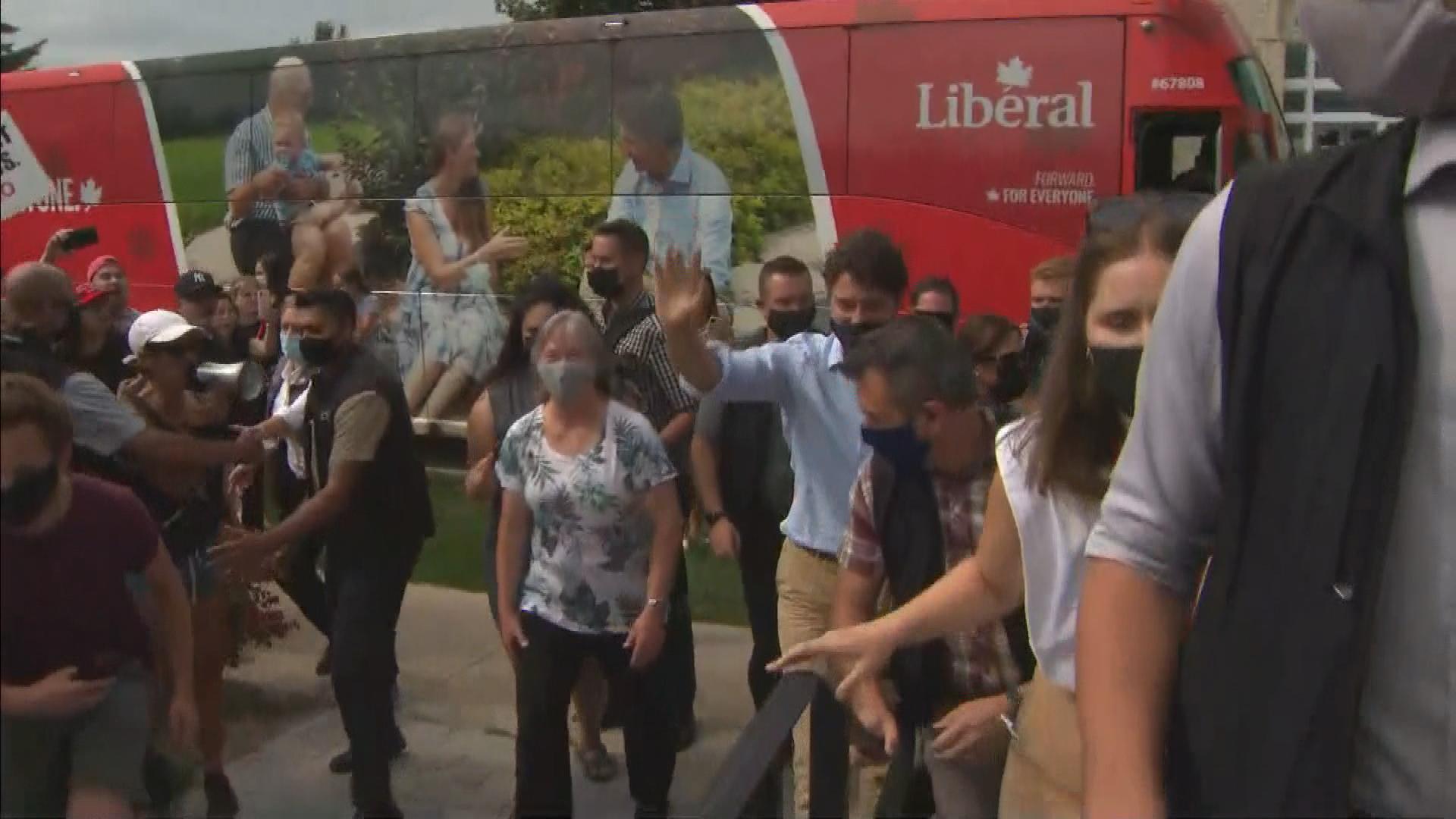 As Trudeau made his way toward the entrance of the bakery, protesters followed him and his RCMP security contingent, continuing to shout and give him the middle finger.

Once inside, Trudeau toured the bakery and spoke with the owners and some employees before making his way around a seated area to speak to a few patrons.

A few protesters entered the bakery unmasked and began to follow Trudeau.

One woman shouted “why are you threatening segregation?” presumably in reference to the Liberal’s promise of a billion-dollar fund to help provinces create their own vaccine passports, while another woman yelled “leave the kids alone!”

As Trudeau left the bakery to return to his campaign bus, demonstrators lined his path and continued to shout and gesture at him.

Conservative Leader Erin O’Toole tweeted a message on Friday night after his party condemned the use of language and obscene gestures at Trudeau’s campaign stops.

“Canada is a country where people can express their political views, but we must do so peacefully and orderly,” O’Toole wrote. “No one deserves to be subjected to harassment and obscenities.”

The NDP’s Singh also posted a message on Twitter, saying everyone “deserves to be safe on the campaign trail.”

“I am very sorry to hear this happened tonight to Mr. Trudeau and the Liberal team and I hope that everyone is ok,” Singh wrote.

Trudeau wore a bulletproof vest at a rally in Mississauga, Ont., during the 2019 campaign.

During that rally, uniformed tactical officers wearing heavy backpacks surrounded the Liberal leader as he addressed the crowd. His wife, Sophie Grégoire Trudeau, was initially supposed to introduce him but did not appear on stage.

Trudeau delivered the speech at the 2019 rally without incident, then shook hands with numerous supporters lining the stage and in the crowd as he left the venue.

At the time, government sources confirmed an increase in online posts condoning violence during the campaign.