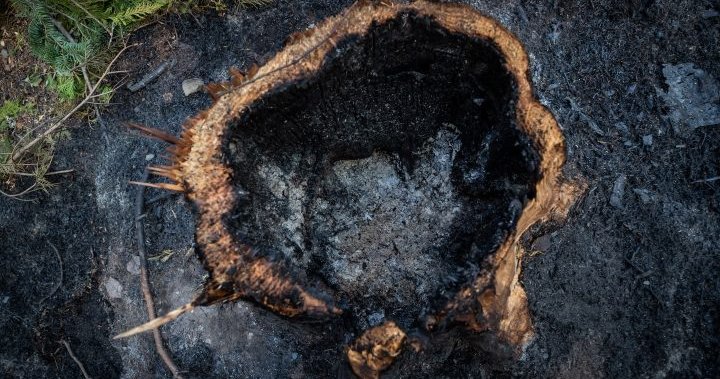 Wildfires that race through communities, incinerating ingredients that make up modern-day life, can leave behind a trail of toxic metal, says an expert.

Michael Brauer, a professor at the University of British Columbia’s school of public health, said some of the hazardous materials found in ash and soil after a wildfire include asbestos, arsenic, lead and mercury.

Most of the metals come from household items such as paint, treated wood, thermometers, cars and electronic goods.

“And it also depends on the age of the structures and the communities,” Brauer said in an interview. “So, for example, lead is often found in pipes and paint in some older homes, and newer homes don’t have that.”

The fires that burn “very, very hot” are good because they break down most of the plastics and metals into relatively harmless compounds, he said.

Crews who mop up following a wildfire don’t just clear away the ash and rubble, but typically will test the soil and water for toxic metals, he said.

A report on toxicity and pollutants found in ash and air samples after the fire that destroyed most of the village of Lytton is expected soon, said Pader Brach, Emergency Management BC’s executive director of regional operations.

This will be the first time such a report will be written in B.C. following a wildfire.

The fire in Lytton began the afternoon of June 30. Brisk winds and tinder-dry conditions fuelled the flames and within hours much of the village was destroyed.

The Transportation Safety Board joined the RCMP and BC Wildfire Service in an investigation of the cause days after the fire, saying there was some indication a passing train may have sparked the blaze.

No cause has yet been determined.

About 90 per cent of the village was wiped out, including homes, businesses, the RCMP detachment, the ambulance station, the Lytton Hotel and the Chinese History Museum. A tour of the place showed rubble, twisted metal, skeletons of cars and charred remnants of life.

The Insurance Bureau of Canada reported the value of damage caused by the wildfire was an estimated $78 million for insured properties. It said in a statement earlier this month that about 300 claims had been made to that date.

Brach said the report will identify the pollutants of most concern.

“It’s a long process to recover from a significant event like a wildfire that impacts the community,” he said.

2:35
Canada election: How does each party’s plan to tackle the climate crisis stack up?

Canada election: How does each party’s plan to tackle the climate crisis stack up?

On May 3, 2016, the wildfire that spread through Fort McMurray, Alta., forced 90,000 people to escape and destroyed thousands of buildings.

Two years later, a study by Alberta Health found elevated concentrations of metals, including asbestos, mercury, arsenic, chromium, copper and zinc in ash samples. High amounts of hydrocarbons from burned plastic was also found. Most of the arsenic discovered came from treated woods, the report said.

“The combustion of urban structures and their contents led to the release of a diverse array of contaminants of potential concern associated with the ash and debris,” it said.

Brauer noted that while every community would have different levels of metal concentrations in soils and air depending on the age and composition of structures, it is important to let crews finish thorough testing and cleanup of areas damaged by wildfires before moving back.

In some areas, he said a few centimetres of topsoil is removed before people can return because the metals make a permanent home in the dirt.

“You don’t want children crawling around on soil with, you know, high levels of metals,” he said.

“They may be crawling around on the dirt and put their hands in their mouth. Or, for example, if you’re gardening, you don’t want high levels of the metals in your garden.”