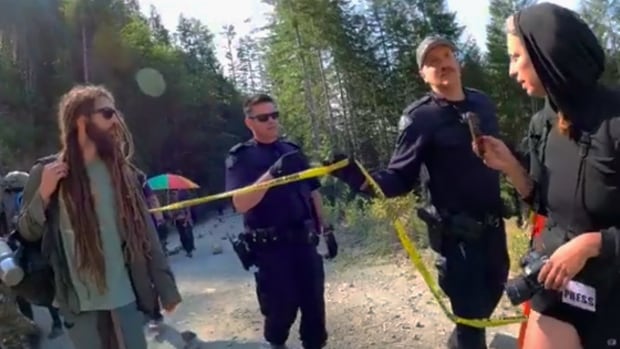 Legal experts say they’re concerned about a widely shared video showing an RCMP officer telling a journalist to be “silent” while she covered protests against old-growth logging on Vancouver Island “or you’re gone.”

Ora Cogan, who is reporting on the protests for Teen Vogue, posted the video on Twitter earlier this week. It shows her speaking with a Mountie as he appears to move a group of protesters along a gravel road in the Fairy Creek watershed.

The video shows him telling her, “You’ve already been told the rules. You are to be silent while doing your job, or you’re gone. You are not to talk to us or engage with us. You are to be independent and quiet.”

That interaction is unacceptable to Veronica Martisius, staff counsel for policy at the B.C. Civil Liberties Association, who said reporters have a right to do their jobs without police interference.

“For an officer to order a journalist not to engage … and to threaten that journalist, that if you do engage, I’m going to remove you, that’s totally inappropriate,” she told CBC News.

“That officer has a choice whether or not he wants to answer questions, but you can’t order a journalist around and tell that journalist how to do their job.”

The Canadian Association of Journalists also said it was “very concerned” about the content of the video and was gathering information about the situation.

“Journalists are not meant to be silent,” the national organization said in a tweet on Wednesday.

The video is just the latest example of police actions at the Fairy Creek blockades that have raised concerns about press freedom.

RCMP officers have been on the scene since May, enforcing a court injunction against blockades preventing lumber company Teal Jones from logging its 595-square-kilometre tenure on southwestern Vancouver Island.

In that time, some of the RCMP’s actions to restrict reporters’ activities at protest sites have already been declared unlawful in court. Earlier this month, a B.C. Supreme Court judge ruled that police had no legal authority to refuse entry to the Fairy Creek watershed to either journalists or members of the public.

‘Police officers have a right to not be obstructed’

When it comes to Cogan’s video, however, another legal observer is urging viewers not to jump to conclusions.

Kevin Westell, a criminal defence lawyer in Vancouver, agreed there are reasons to be concerned about the officer’s actions.

“Anytime you see a member of the press being treated so tersely and being given a command of that nature, the hair stands up on the back of your neck,” he said.

But he hesitated to give a definitive opinion on whether the officer’s actions were appropriate, saying context is important.

“Police officers have a right to not be obstructed at work when they’re trying to carry out their duty,” Westell said.

He argued that if an officer legitimately felt that a journalist asking questions was obstructing his ability to maintain public safety, the officer might be justified in saying they needed to be quiet — but only in that moment.

“At the same time, if that police officer is setting up broad ground rules over the entirety of the situation, saying that a police officer is entitled to order a member of the press to never speak, that’s an entirely different thing. That would be completely inappropriate,” Westell said.

RCMP spokesperson Sgt. Chris Manseau told CBC News that he couldn’t comment on an individual officer’s actions based on a short video.

“Anticipating that more videos will continue to surface, I caution anyone viewing them and reading comments to keep in mind that they do not fully capture the events leading up to or following the interactions,” he wrote in an email.

Officer refuses to identify himself

Meanwhile, another aspect of Cogan’s video has also raised some questions about police conduct.

The video shows her asking the officer for his name, but he refuses to give it.

That doesn’t sit right with Martisius.

“They have to identify themselves. How else would people be able to follow up with a complaint if they’re not able to identify the officer that they’re complaining against?” she asked.

As for Manseau, he argued that Mounties could be putting themselves at risk when they give out identifying information.

“Members have, in previous operations and in this current one, experienced being targeted online, doxxed and harassed when generally asked for their names,” he said.