Birds flutter across as the leaves of a coconut tree sway gently. All around them are mud houses — in bright hues of blue, red, peach and green — that cling to each other. The structures sit on what seems to be a river: the water ripples as the moon climbs higher and higher, against passing stars. A static, rather abstract, folk-inspired acrylic work thus comes alive when one holds a screen against it.

Wali’s first solo show in Chennai, the display showcases 28 of his works, done across mediums like charcoal, pens, pencils and acrylics. While 11 of them are AR-enabled (rendered by the design team at Vennba), the rest gives a glimpse into Wali’s affinity toward folk motifs and how he interlaces them with contemporary elements. 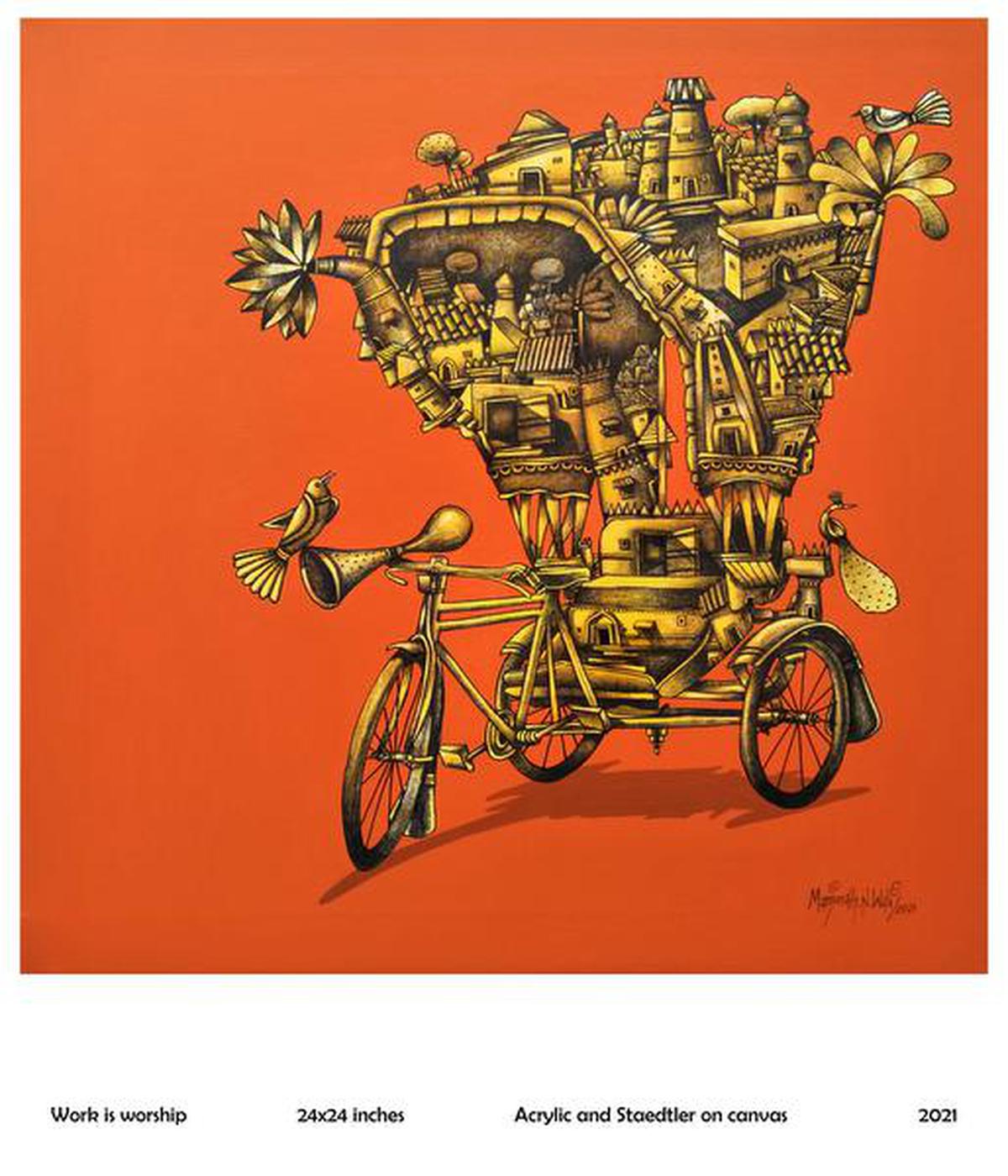 Crowded with meaning, and with recurring images of village landscapes, the canvases are meant to introduce an urban audience to the simple joys of the countryside. “I am interested in the folk style of architecture, and inspired by historical monuments. I thought I could merge them into contemporary landscapes too,“ says Manjunath who spent his childhood in Huvina Hipparagi, in Karnataka’s Bijapur district.

His own village, especially when decked up during festivals with “a combination of colours splashed on walls”, has served as a muse many times. The series on display, which screams happiness and nostalgia, is largely inspired by familiar landscapes and forgotten scenes from his childhood. 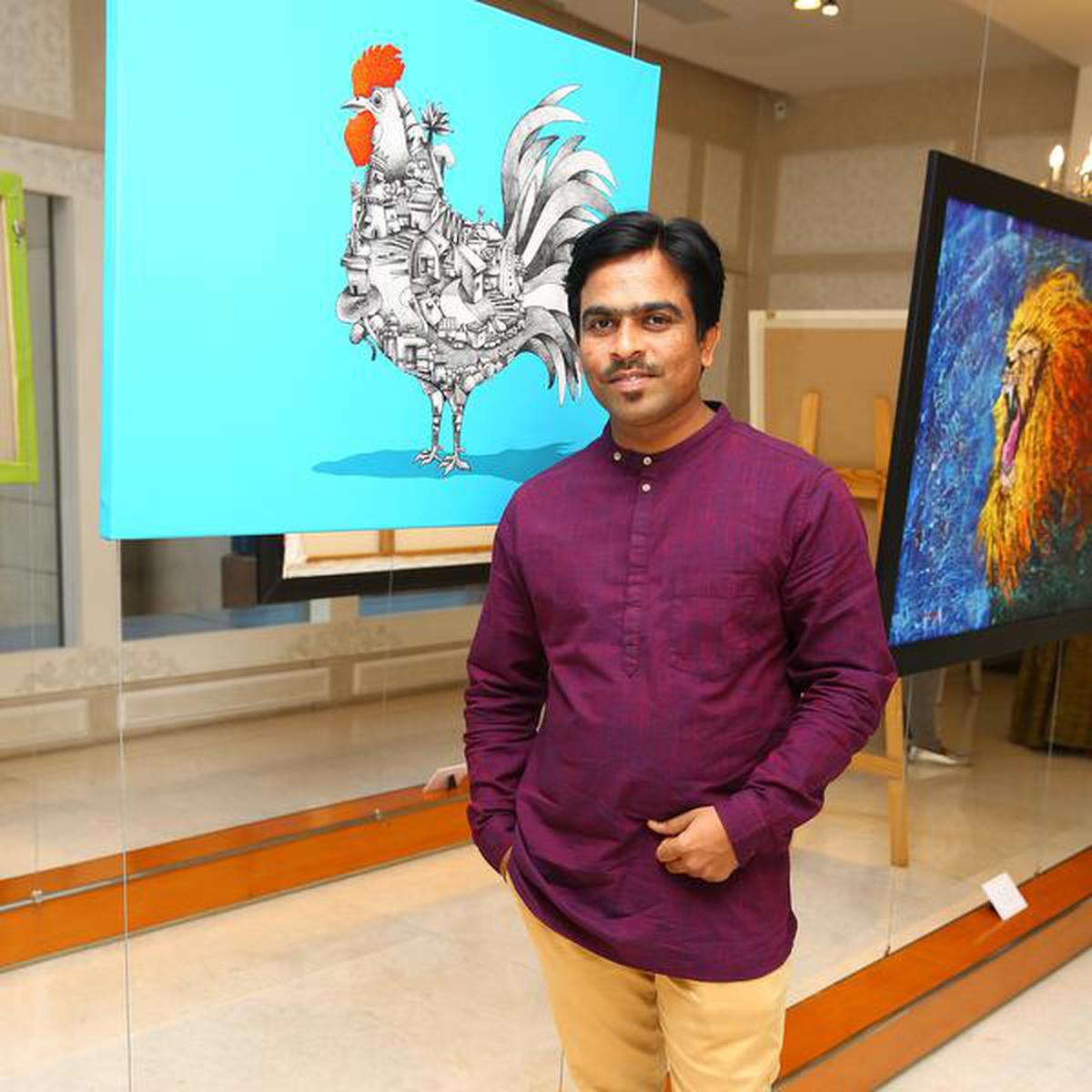 The artist, in fact, says he was confused when he saw the AR version of his own work. “My birds were not flying on the canvas, but they were flying on the screen!” he laughs. These versions can be viewed on any device through an app called Artivive.

In contrast to this interactive series stand his equally intricate, black and white works. They are his favourite. “Black and white works are very challenging. Especially when you have to show dimension in a single tone. It is a risky task!” he says.

Done using charcoal, pen and pencil, Manjunath takes a single object and creates a world within it. In the piece titled Live Together, the artist zooms in on the facade of a lorry, on which he portrays homes, castles, fragments of doors and windows, roofs, and mud tiles, and juxtaposes them a serene, mountainous landscape.

Perched atop the lorry are scores of birds. For Manjunath, birds are metaphors for happiness and freedom — and so, most of his canvases house a bird or two. “Earlier, I used to experiment with different styles to arrive at a bird figure. Lately, my birds have also become inspired by folk art,” he adds. 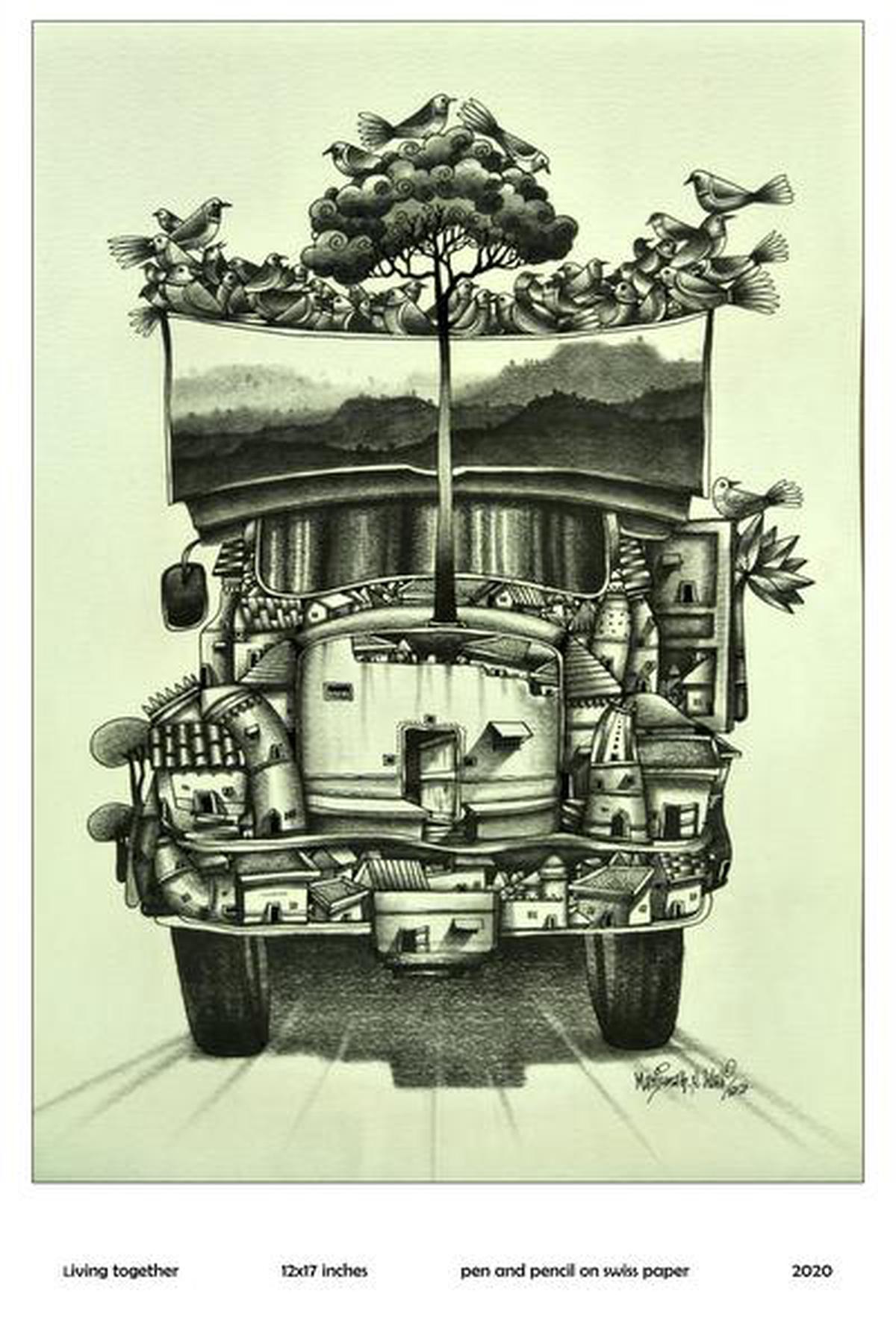 Unwind, another acrylic work in varying shades of brown, shows a gramophone that encapsulates similar architectural and natural elements — birds make an appearance there too, since the gramophone is an allegory to a liberated and therapeutic experience.

Manjunath always goes back to “once upon a time” in his works. “I represent that time. I want the coming generations to know more about village architecture and traditional objects.” He has been working around this theme since 2011 and plans to fashion fibre and bronze sculptures next, while sticking to the same concept.

Folk Phorescence is on view at Vennba Gallery, T Nagar, till August 31.