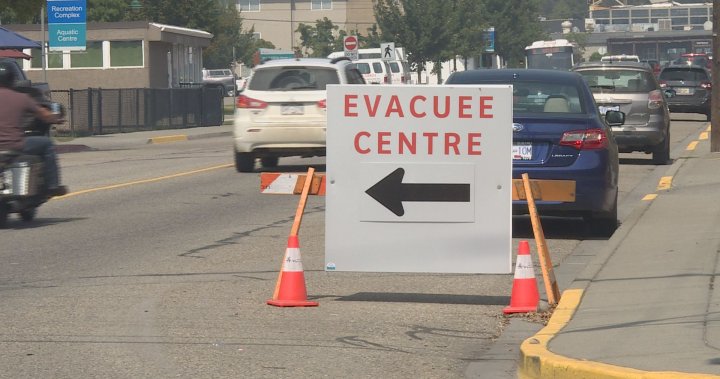 As the massive White Rock Lake fire continues to menace the westside of Okanagan Lake, some evacuees have spent weeks away from home.

Now the BC Wildfire Service is saying that a planned ignition Wednesday could pave the way for some to return home, but not right away.

“So [on Wednesday] we are actually doing a planned ignition operation on the southeast flank. That ignition operation is around 450 hectares and what that is going to do is bring the fire’s edge down to an established control line in that area that will secure that area,” said Swift.

“So once that ignition is complete, by the end of the day [Wednesday], and we get in there and finish mop up all around that area that will really secure that whole flank and that is when hopefully we can make a recommendation to the regional district and make any changes. So at this point, we are looking at five, ten days. Good news will be coming. I know it has been a long haul for everybody.”

“What we are seeing here on Westside Road is drought conditions where entire root systems are being consumed by the fire. It takes a very long time for our fire crews to get in there and really do a thorough patrol, a thorough mop up and dig up any hot spots that might still be there,” Swift said.

“The last thing we want is to send residents home and then have smoke or fire pop up in their backyards.

There are also concerns about danger trees and downed powerlines in the evacuation area, Swift said.

Work is ongoing to restore powerlines and clear out trees that may pose a threat.

With Westside Rd. the only route to the area, and so many staff onsite, Swift said any evacuation changes would need to take access into consideration.

“With that one egress route and just the number of personnel we have out there patrolling and mopping up and ensuring everyone’s safety, it’s not safe yet for us us to recommend any changes to those evacuation orders,” Swift said.


Some evacuees displaced since August 1

Evacuees are stressed and anxious as the evacuations drag on.

Steve Hansen is among a group of evacuees from the Parker Cove and Westshore Estates areas who were forced out of their homes by the White Rock Lake wildfire, more than three weeks ago, on August 1.

Being displaced has completely disrupted his normal routine.

“There is a lot of stress,” Hansen said.

“Just to get the services that you need you have to go through quite a bit of red tape. We are looking forward to getting home.”

Some long-haul evacuees are now reporting they’ve been asked to use their home insurance to pay for expenses.

“They are trying to claw back and save the amount of money that they are paying out to people who have other means,” Hansen said.

However, Hansen said his insurance coverage to pay for alternate accommodations is finite.

“Depending on how expensive it is, without assistance, you are going to go through that quite quickly,” Hansen said.

The province says Emergency Support Services are intended to assist evacuees who don’t have alternatives like friends and family or insurance to fall back on and those in need will receive support as long as they are on evacuation order.

“There is a process to ensure legitimate need and each applicant is assessed on a case-by-case basis by hardworking volunteers at the local level,” Emergency Management BC said in a statement.