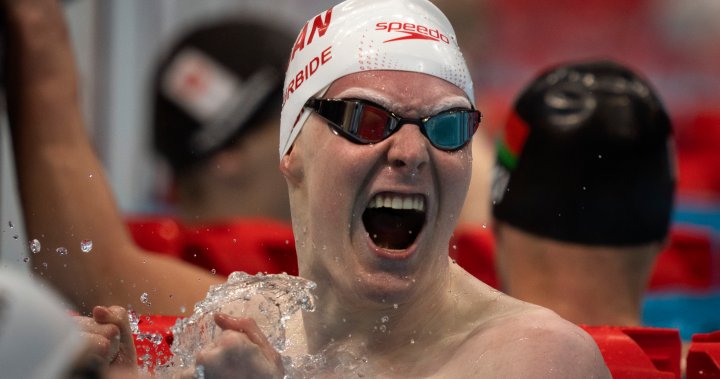 Canada’s Tristen Chernove raced to a silver medal in cycling’s C1 3,000 metres at the Tokyo Paralympics.

The 46-year-old from Cranbrook, B.C., was overtaken by Russian Paralympic Committee cyclist Mikhail Astashov in the race for gold at the Izu Velodrome in Shizuoka.

Canadian Nicolas-Guy Turbide swam to a silver in the S13 100-metre backstroke later Thursday, upgrading from the bronze he captured five years ago at the Rio Paralympics. The 24-year-old from Quebec City has a visual impairment.

4:26
Calgary athletes to watch at the Tokyo 2020 Paralympic Games

Calgary athletes to watch at the Tokyo 2020 Paralympic Games

With the pair of silvers on Day 2, Canada has four medals at the Tokyo Paralympics.

Chernove’s medal was the fourth of his career.

He won silver in the same event at the 2016 Rio Games, and also won gold in the road cycling C2 time trial and bronze in the C1-3 1,000-metre time trial on the track.

Chernove was diagnosed in 2009 with Charcot-Marie-Tooth (CMT) disease, which affects his lower legs, and he took up competitive cycling in hopes of slowing its symptoms.

The Rio Olympics marked his big breakthrough in the sport and since then he’s raced to numerous world track and road race medals.

Chernove led the Canadian team with silver medals in the kilo, scratch race, and omnium at the 2020 world track championships just before the pandemic hit.