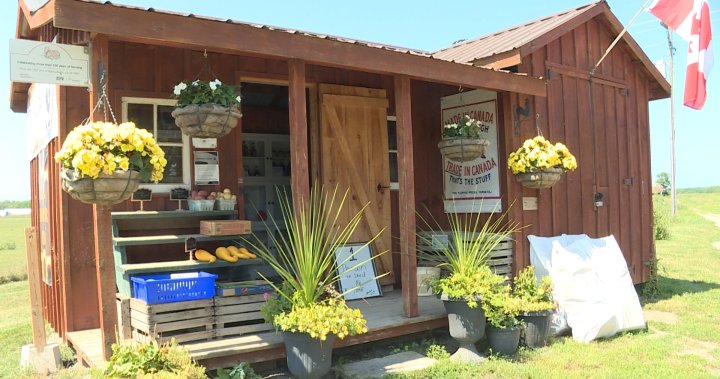 Jocelyn Buggie says it was last Friday that she and her family realized their roadside stand on County Road 8 at their family-owned Sunnydale Farms had been robbed.

“We were sitting on the deck and noticed a car, and when they left we came directly out and the cashbox had been emptied for the second time that day,” said Buggie.

Buggie says she posted news about the theft on Facebook shortly after realizing the cashbox had been emptied again.

After not that long, she says, she started receiving messages from other stand owners in the area, telling her they had been robbed as well.

Buggie says the whole experience has been frustrating and disheartening.

“It’s one thing to know that you have strangers coming and going in your driveway everyday. But you know that they have good intentions,” said Buggie.

“But, to know that there’s somebody that’s coming with ill will, it kind of makes you a little unnerved. Especially when you’re sitting in the yard and it’s happening right under your nose.”

Buggie says she’s now contemplating getting rid of the cashbox system altogether and sticking to email money transfers instead.

Jane Forbes is a regular customer at Sunnydale Farms and says the thefts are disappointing.

“This is, you know, someone’s livelihood and it’s such a lovely community, that it’s unfortunate that someone is kind of ruining it for others,” said Forbes.

Buggie says she has reported the thefts to the Ontario Provincial Police.

A statement from the Prince Edward County OPP reads:

“The Prince Edward County OPP are continuing their investigation regarding the theft of cash boxes from road side stands. The police also encourage other victims to come forward and report any similar thefts which may have occurred at their establishments.”

Buggie says she’s aware of at least eight other stands that have been robbed in the region, but she’s hopeful now that a suspect vehicle and license plate have been identified, there may be an end to the rash thefts.