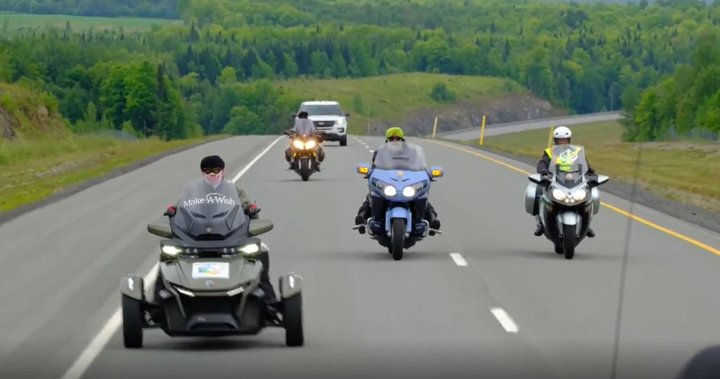 Nothing more than some easy cruising for the rest of the summer for the Legendary Sikh Riders, now that they’re back home in Surrey.

They are fresh off an epic motorcycle ride that took them across Canada, raising money for the Make-A-Wish Foundation: 22 days on the road and close to $35,000 in donations, exceeding all expectations.

“As we went, the whole thing kind of snowballed,” said Malkiat Singh Hoonjan, the road captain during the trip. “The buildup was that one community did a little bit, the next one topped them and the third one topped them even more.”

Most provinces recognized the religious exemption for Sikh riders to not wear a helmet, but they were forced to trailer their bikes in Quebec and Saskatchewan.

The only other setback was when one member made a wrong turn in Ontario and was gone for five hours.

“Somehow, it took him to the U.S. So we’re going one way and he’s going the other way,” said Hoonjan, laughing.

It was Kulwinder Singh Dhillon who got a little sidetracked.

Some incredible connections were made along the way.

In Calgary, they held the sword of the first warrior king of the Sikh empire, owned by billionaire businessman Bob Dhillon.

There was a police escort for part of their ride in the Maritimes.

They joined another charity ride outside of Toronto, and were honoured by local politicians at a pool party in Orangeville.

In B.C., Jackie Andrew of the Lil’wat First Nation, near Pemberton, made them vests to wear in memory of the 215 children whose remains were found at unmarked burial sites at a former Kamloops residential school back in May.

It’s their first charity ride, but it certainly won’t be their last. The Legendary Sikh Riders are already making plans for something much bigger next summer

“Anyone says they’re riding for this cause, I’m riding with them,” Kulwinder Dhillon said. “I’m still around. I’ll be doing it. I’ll always be doing that.”