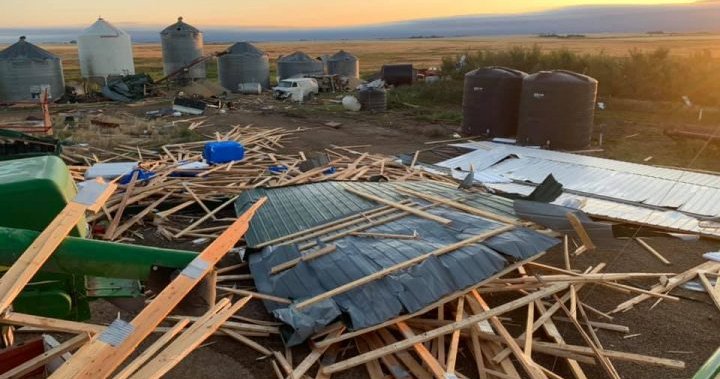 Trenton Zakaluzny said the earlier of the two confirmed tornadoes left almost nothing left of his Hodgeville-area family grain farm.

“The tornado touched down at around 6 p.m. last night. It blew right past the side of the house, knocked some trees over, went down through a couple sheds, down through some bins, knocked the back wall down of our quonset and flipped swathers,” said Zakaluzny.

“It went down to our big shed where we have all of our equipment and twisted through there. It took all of our windshields and panels off things.

“There’s really not much left of what was there or anything available to use for this harvest season for the crops we have.”

Zakaluzny said that, luckily, nobody was hurt as the storm came through.

He said his father was the only one on the property.

“He said it was sunny on one side, and walked to the other side to look out the window. All of the sudden he sees a fuel tank roll across the yard,” he said.

“He looked out the front window and there was bins rolling across the yard and sheets of tin. He said it all happened in the time he got form one window to the other. It took most of our farm.”

Zakaluzny said the local community was quick to respond. Around 40 people were on site helping clean up by noon Tuesday.

“We don’t have any equipment available for use now, but we’ve had lots of people reach out to us, neighbours who are close by who say they’ll come help out with the little crop that we have,” he said.

“They’ve been working hard. It’s been absolutely incredible and I wouldn’t expect anything less from the people around here.”

And he added the storm damage was the second disaster to strike their family farm this year. A fire took down both of the farm shops earlier this year.

An online fundraiser has also been set up to help the family recover from the damage.

Environment Canada confirmed that two tornadoes touched down Monday evening. The first, about 24 km southwest of Hodgeville, touched down at around 5:50 p.m.

The second occurred just east of Kindersley just after 7 p.m.

Environment Canada is still investigating to determine a rating for those twisters. They’re also investigating reports that a third tornado touched down southeast of Hodgeville about half an hour after the first one in that area.

No injuries have been reported from either tornado.

“We actually had slightly cooler than normal temperatures although there were mid to 20 degree daytime highs across parts of south-central Saskatchewan,” Quinlan said.

“So that, combined with an area of low pressure moving in provided the instability, the lift and the spin that is required to generate tornado-warned thunderstorms and that’s what we saw moving through the area.”

The storms brought significant precipitation to a large chunk of the province. Quinlan said the Saskatoon-North Battleford area saw the most, with rainfall levels north of 20 mm.

Several people posted moments from the storm on social media.

Up to marble size hail layered about an inch thick on highway 4 south of Rosetown #skstorm at 10:05pm Aug 23 pic.twitter.com/L6Y7Qry4R5