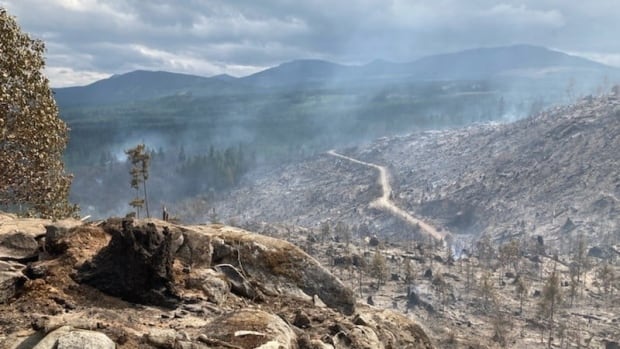 A manager for British Columbia’s wildfire service says conditions are trending in the right direction with the number of fires that threaten public safety and property dropping down to two dozen from 30 early this month.

Todd Nessman says cooler temperatures have helped curtail significant fire growth in recent days and crews are making “some excellent progress” on some of the larger blazes.

He says there are still areas that haven’t seen significant rain, including parts of the Cariboo and south Okanagan, and the fire service is keeping a close watch on the situation there.

Just weeks ago, B.C. was experiencing its third heat wave and thousands of residents had either been forced to leave their properties or had been placed on evacuation alert to be prepared to leave as dozens of fires encroached on properties. While the situation has improved, evacuation orders remain in place for more than 3,500 properties across the province.

Nessman, who’s the manager of wildfire operations with the service, says crews are making “excellent progress” on the western flank of the 809-square-kilometre White Rock Lake fire that destroyed dozens of homes and chased thousands out of areas between Kamloops and Okanagan Lake in B.C.’s southern Interior.

Nessman says B.C. will see a series of “fall-like [weather] patterns” in the next week, though there’s potential for new fires and growth until more rain arrives to address underlying drought in many areas of the province.

“All the signs are sort of pointing towards a fairly stable environment where we’re not going to see that elevated fire behaviour, conditions that we were quite concerned with and we experienced not that long ago, even a week ago.”

The fire service has somewhat downsized its aerial firefighting fleet, which Nessman says is a good indicator of crews’ progress battling nearly 250 fires.

The wildfire service is aiming for solid containment lines and a sustained lack of growth at the largest and most threatening blazes, Nessman says. That’s when it could recommend to local governments that some of the 111 evacuation alerts and 54 evacuation orders covering close to 3,800 properties may be lifted, he says.

Some of the larger fires have been burning since early July and the wildfire service expects to continue working to extinguish them for weeks to come, he adds.

Also on Tuesday, the province announced that Highway 12 has reopened between Lillooet and Lytton. The roadway has been closed since a wildfire swept through and destroyed most of Lytton on June 30.

B.C. has recorded 1,545 wildfires that have scorched more than 8,800 square kilometres of land since the start of the season, Nessman says.